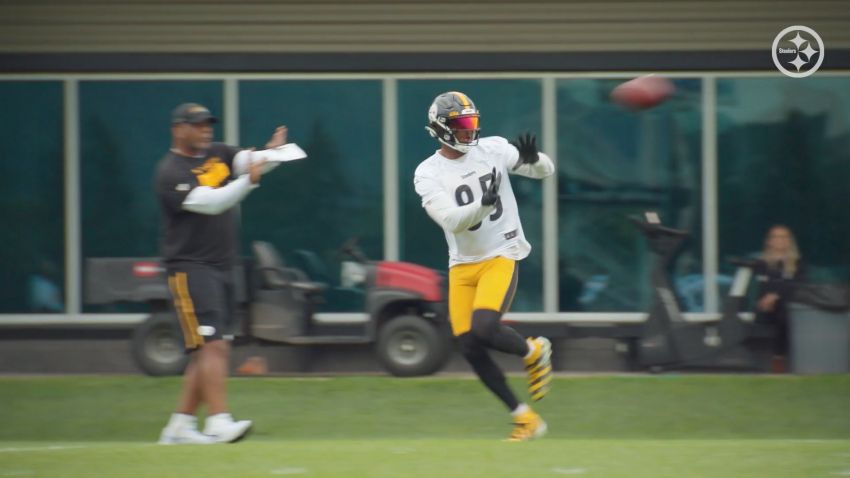 During the team’s minicamp sessions, Eric Ebron was interviewed being asked about how new OC Matt Canada’s offense would impact him and the rest of the TE room. He responded that he was excited for his role in the new offensive system, stating that he and the other TEs’ roles would expand to get them more looks and play time this upcoming season. Obviously, the offseason is when everyone can be optimistic on expanded roles and improved usage, but after digging more into the film, I came away fairly excited, thinking that Ebron’s comments do carry some weight.

Now the calling card we have all come to know from a Matt Canada offense is the pre-snap motion and the movement to disguise and create mismatches on the field. Take, for example, this play when Canada was at Pitt and used the jet motion to get both linebackers from Miami to bite on the run fake, allowing the TE to run free up the seam for the easy first down completion. Knowing the skill set of both Ebron and rookie Pat Freiermuth, I would think Canada could implement the same concept to utilize both players to stretch the seam and challenge a defense up the middle.

Canada is a fan of aligning both TEs on the same side of the formation in more of a heavy look, trying to get speed to the edge of the field. Here at Pitt we see both TEs start on the right side of the formation, then flip over to the left with the pre-snap motion, then flip back again to the right side to mess with the defense. The TEs then pick up the linebacker and defensive back on the right side of the field as the jet motion comes their way. However, the QB hands the ball to the RB who takes it up the middle for a small gain on the play. I would have liked to see the back get a pitch to the right side with three guys out in front or what would have happened if the jet man got the ball with a one-on-one situation, but still an interesting concept.

Here is another look at pre-snap motion from Canada’s days at LSU where he flips the entire line, having two TEs flip from the right to the left in a heavy set to block for the runner coming across the line on the sweep. While the play doesn’t get great yardage, it shows the use of the motion on run-heavy sets to try and get the sideline against the defense. This play also shows one of Steelers Depot’s favorite draft crushes from a few years ago, #18 Foster Moreau, blocking downfield should a reunion with Canada ever come about.

We honestly saw traces of a similar concept last year in Pittsburgh here on this clip against the Browns where Ebron and #38 Jaylen Samuels align on the left side of the formation in a heavy set near the goal line and lead up the way to allow for #11 Chase Claypool to get the corner on the jet sweep from the wingback position. Given the usage here and the skillset of Claypool as well as Anthony McFarland who was used in a similar role in Canada’s offense at Maryland, I have to expect this usage to continue and possibly more motion to be added.

Given the notable shift in focus to more athletic, physical offensive linemen in the draft and free agency, the Steelers have hinted at using more zone concepts in their running game compared to the past. I, for one, am in favor of such usage, especially if implementing the TEs. A good example here on a stretch zone to the left for the San Francisco 49ers with TE #85 George Kittle coming on the motion from the right to the left, lining up next to #44 Kyle Juszczyk who is split out in the slot. The FB blocks down on the LOS and Kittle leads up the lane, chipping the corner for the OT to pick up and moves off the safety, getting the block and springing #31 Raheem Mostert for a big gain.

Now I’m not saying that Ebron or Freiermuth are Kittle, but I do see a scenario where one can line up as the H-back and the other in the slot and get on smaller bodies in the run game to spring the likes of Najee Harris or Anthony McFarland on the outside.

Another team that uses multiple TE sets very well is none other than the Baltimore Ravens. Here we see both TEs line up on the right side of the formation with one in-line and the other in the H-Back role. On the snap, the H-Back rolls over to the left for a max protection pass with the other staying in to block as well, giving #8 Lamar Jackson plenty of time to fake the handoff and look downfield before checking down to the jet sweep receiver for a good gain on the play. Given the loss of proven pass protectors up front and how Ben needs to be protected, I definitely could see a similar usage occur for the Steelers should they choose to allow their receivers to try and win downfield and call for max protection.

Another key way the Ravens use their TEs is in the running game. On this play, we see #86 Nick Boyle block down the LOS while the LG and #81 Hayden Hurst lead up the hole.

The funny thing is, we have seen similar usage from Pittsburgh’s TEs pulling across the LOS before, like on this rep against the Texans where #89 Vance McDonald pulls from left to right with LG #71 Matt Feiler to try and seal off the edge for #30 James Conner. While they are unable to get a great gain on the play, Having another TE on the right shoulder of #76 Chuks Okorafor to help pick up another block could help the situation as Ben fakes the jet sweep to #18 Diontae Johnson, having one less man there to meet Conner and hopefully help him get more yardage should McDonald and Feiler get their blocks.

One play that I personally love when doing a report earlier on FB Derek Watt was the use of the shovel pass off of jet motion to the H-Back like we see here against Clemson. We see two TEs split out to the right and one comes back to the left to line up in the H-Back position. The QB signals the jet motion where the defense commits to on the snap of the football, leaving a nice alley for the H-Back to catch the easy shovel pass and proceed to break out of an ankle tackle to run into the endzone for the score. Figuratively, this H-Back could be Watt or one of Ebron or Freiermuth who the latter has experience working in this role during his playing days at Penn State, something I would think Canada and TE Coach Alfredo Roberts probably recognized scouting him and projecting him as a fit in this offensive system.

So, after watching more film of Canada’s days calling plays in college football as well as looking at the emphasis to adding another high-pedigree TE early in the 2021 NFL Draft in Pat Freiermuth, I do expect the usage of two TE sets to increase both in the passing game and in the running game. Pittsburgh is looking to move to move of a zone running system under Canada’s direction given their investments along the offensive line the offseason, allowing the team to work on getting TEs on defensive backs and linebackers out in space or seal the edge on wide zone/counter concepts in heavy formations to pop off bigger runs on the outside with the likes of Najee Harris, Anthony McFarland, etc. While I still may not be in full support of the decision to draft Freiermuth over C Creed Humphrey, who was on the board in the second round, I do think this points to a plan of usage for Freiermuth year one besides being the eventual future replacement of Ebron as the team’s hopeful long-term answer at TE.

What are your thoughts on utilizing multiple TE sets in Canada’s offense this offseason? Do you think that this could help the running game having a relatively new OL up front, or do you think that there really won’t be any notable improvement given who Ebron and Freiermuth are as blockers? Could this create mismatches in the passing game? Leave your thoughts in the comments section below and thanks again for reading!