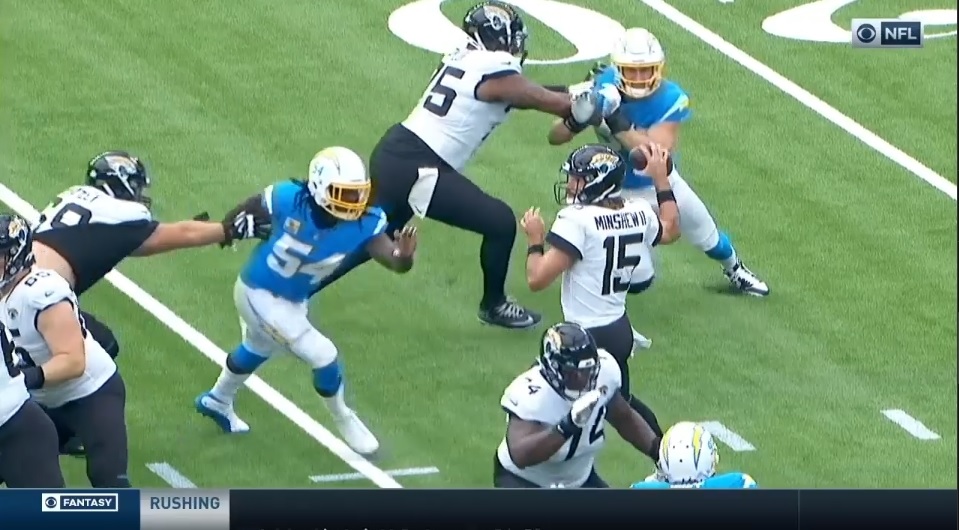 The Pittsburgh Steelers made a crucial, necessary signing by adding outside linebacker depth with veteran pass rusher Melvin Ingram. We’ll have more film rooms on his overall game and highlighting specific areas like his ability to cover. But he’s a strong system and scheme fit for the Steelers. And that’s important.

Pittsburgh prides itself on versatility, flexibility, and the ability for the front seven to move around and create chaos. A little less than they used to in the Dick LeBeau days but the more you can do along this front, the more options the defense has.

Ingram has played in versatile schemes with the Chargers. Don’t think of him as a purely, hand-down defensive lineman. He’s not (and even if he was, that’s ok – TJ Watt plays with his hand down 75% of the time 3rd down). I went back and watched all the third down passes he logged last season and the Chargers moved him all around the defensive front. His use of games, twists, and stunts was notable and fits in well with what the Steelers do.

This first example comes on 3rd and 3 against the Bengals in Week One. The Chargers align in an Under Front with the defensive line shifted to the weak side. The 1 tech in the A gap slants away on the snap of the football with the three tech and Ingram, #54 the ROLB, run a game. The three tech crashes to the outside with Ingram shooting the A gap and blows past the LG. The ball gets out of Joe Burrow’s hand in time but Ingram got free up the middle for a would-be pressure.

I love this clip in Week Two against the Chiefs. Fire stunt between Ingram, lined up off-ball in the B gap, and the one tech. Defensive tackle shoots down with Ingram coming over the top into his gap. Patrick Mahomes feels the pressure and bails the pocket, moving to his left, taking away half the field (though it’s Mahomes, so maybe not) and forces him to scramble short of the sticks.

Another T/E stunt against the Broncos in Week 8. Ingram starts off-ball but bounces into the B gap right before the snap of the football. Here, he’s the crasher occupying the offensive lineman as the five tech loops to the inside. The guard picks him up late but Drew Lock feels the heat and bails on the pocket into a scramble drill. His pass is incomplete but gains nine yards on 3rd and 12.

One more similar example against the New York Jets in Week 11. Not a stunt here but a DB blitz. Watch Ingram run the “coffee house” stunt, looking away like he’s going to drop before blitzing the B gap. He winds up running free but can’t get home before the ball gets out (though it’s incomplete).

Cam Heyward and Bud Dupree formed one of the best T/E tandems in the league last season. I mentioned it in my most recent Terrible Take; Heyward’s loops helped free up Dupree time and time again. Some examples from last season.

Did it again Sunday. Bumps Wills and grabs back of jersey with his outside hand to ensure he occupies both blockers. Dupree comes in clean as the looper on the stunt. #Steelers https://t.co/o1RaVVo6It pic.twitter.com/UscacNDKob

Heyward and Ingram can have similar success this season.

Ingram can win one-on-one too all around the front, too. In fact, last year at least, it felt like he had as much – if not more – success in the B gap as a 30 tech as he did on the edge. While he didn’t record a sack, he still showcased quickness, explosiveness, and great hand use to disengage from blocks and pressure the QB.

Two of my favorite examples came against the Jaguars. In the first clip, he uses a great outside spin to beat the right guard cleanly, get pressure, and tip the pass leading to an incompletion. In the second, he uses power to run through the right guard (a different one) after his initial rush move fails to knock him down and pressure the QB.

Ingram gives this defense options and insurance. He can be a capable next-man-up if there’s an injury to TJ Watt or Alex Highsmith. And even when they’re healthy, he can fit into any role Keith Butler/Mike Tomlin would ask of him. He’s a strong fit in this system and though he’s 32, can still play and most importantly, won’t need to play a lot of snaps as a rotational backup. That’ll keep his legs and his body fresh.