Today I am starting my “Offensive Line Study Series”, similar to my other offensive position studies. I wanted to dive deeper into some questions I usually don’t have time for. One of these questions revolved around offensive lineman with the most snaps, and how they graded with these datapoints from Pro Football Focus (PFF):

One important thing before the graph, the players in this study are the leaders in PFF Offensive Snaps. I wanted to learn which players had the most usage (availability), and how those players graded (quality). Here’s what 2020 looked like: 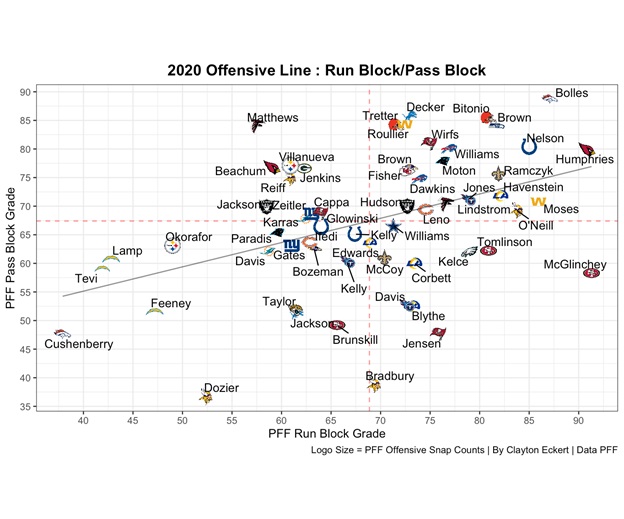 Interesting! Villanueva and Okorafor were the Steelers to make the graph, and both land around the expectations I had going into the study. Kelvin Beachum landing right next to Big Al is also interesting (both being former Steelers). Fun question, how will these three players fare in 2021 considering new roles (Okorafor), teams (Villanueva) or consistent situation (Beachum)?

Next, I wanted to see if I could view the stats in a unique way to possibly get even more value out of the numbers. I also wanted to see how many Offensive Lineman qualified per team along with their positions. Here are some illustrations of that:

The teams that had the most players, then by RBLK Grade were: (four players) Vikings and Rams (three players) 49ers, Colts, Titans, Bucs, and Chargers (the only outlier with all low ranks). The Steelers had no interior lineman make the study, highlighting the missed games there. Unfortunately, it’s a wait and see game with how the line will do in 2021. The loss of Decastro has brought my optimism down since I did my Running Back Series, but I would love for this concern to be proven wrong.

Many left tackles moved up and interior lineman moved down this table compared to the run blocking table. That fits the common narrative of the left tackle position pass protecting the blindside, and the other positions run blocking becomes more important. This has me optimistic (along with many on the Steelers Depot team) that Okorafor can improve in 2021 moving to the left side and Banner hopefully providing the run block value on the right side. This was the plan for Banner in 2020, and I’m so excited that training camp is here, and the preseason is near so we can start learning more about the 2021 Steelers offensive line.

I really enjoyed seeing the rankings from a usage perspective, then layering in the grades. I am hoping the strengths of the new look Steelers o-line to be health, physicality, and improved run blocking. Getting younger there will hopefully help injury-wise (knocks on wood), and I also hope we’ll see the physical style of play we’ve been hearing about this offseason come to fruition.

Similar to my other studies, I wanted to see who ranked the highest in each stat used throughout this study. Taking all the above information, I will rank them for 2020 by: PFF Offensive Snaps, RBLK, and PBLK for a final view for this study:

How do you think the Steelers offensive line will do in 2021? How about by position? How do you think our lineups play out through the season? Next time I will view multiple seasons, thanks for reading and let me know your thoughts in the comments!