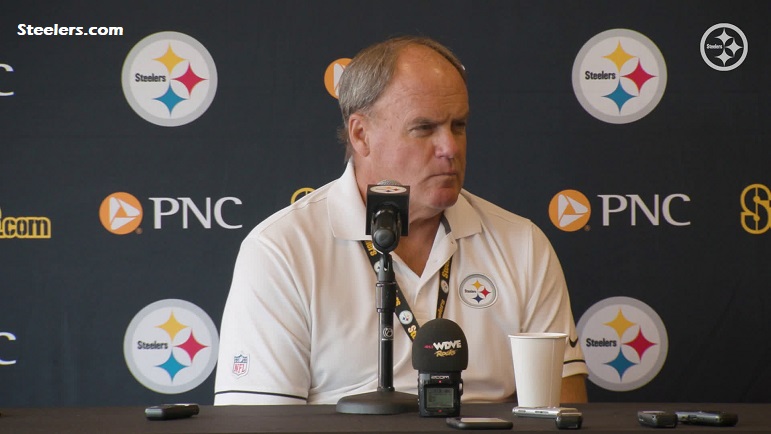 As of Tuesday morning, the Pittsburgh Steelers have almost $12 million in available salary cap space to work with as they enter the second week of training camp. If you have followed my cap updates, you know by now that a lot of that available cap space the team has now is already spoken for due to predictive forthcoming costs the team will have prior to Week 1.
On Tuesday, Steelers general manager Kevin Colbert talked a little about how some of that available salary cap space will be earmarked for things such as injury replacements.

“We always try to do is, unfortunately we’ve averaged about 10 players per season going on Reserve/Injured and that’s just the real number,” Colbert said. “So, we always try to bank on that. But when you do that, you’ve got to realize that a player in Week 1 cost his full salary. In Week 2, he only cost 16/17ths of a salary. So that number goes down. You can’t say you’d have to have that full number for each player throughout the season, because week to week that number goes down. But we try to account for 10 players going on Reserve/Injured at some point during the season.”

The Steelers are doing just fine with their cap management at this point in the offseason and they even recently signed veteran free agents in guard Trai Turner and outside linebacker Melvin Ingram for much more than the minimum. So, with training camp now underway, does this mean that the Steelers are done making roster moves? Not necessarily and Colbert talked some on Tuesday about how players’ markets change throughout the summer, which helps a few become affordable to bargain conscience teams such as the Steelers.

“It’s an individual thing,” Colbert said on Tuesday. “Sometimes it’s positional. Sometimes it’s just a money issue, how you can afford certain players. And we’re happy with the group that’s come together to this point. When Melvin Ingram was still available and we could work it, we were happy to do that. When Trai Turner was affordable and workable, we were happy to do that. So, we’ll see what we’ve got The Steelers are also in contract negotiations with T.J. Watt, which they are trying to finalize prior to the season.

So, will the Steelers still sign yet another free agent or two in the coming weeks and one that might ultimately make the 53-man roster? Well see, but odds are good that they will and especially based on the team’s track record under Colbert.

Personally, I think we could still see the Steelers add a veteran safety that will ultimately make the 53-,man roster. Stay tuned.