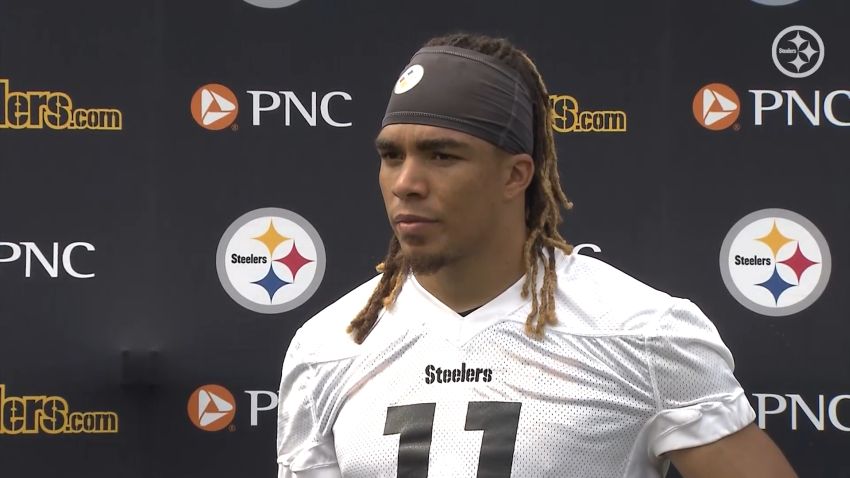 As great as any one wide receiver is, there will always be a time that you need another who can make a play. A wide receiver’s production is contingent upon his quarterback being able to get him the ball, and if a defense truly wants to take a star receiver out of the game, they can roll the coverage to him and make it nearly impossible to deliver a safe throw.

The only way to compensate against a defense leaning against a receiver, other than having other available targets, is in diversifying that receiver’s package, opening things up in order to try to prevent or discourage teams from doubling and tripling him.

That’s what Pittsburgh Steelers wide receiver Chase Claypool is hoping to see in Matt Canada’s offense as he heads into year two, in the hopes of continuing to bloom, and to build off of his strong rookie season, during which he noticed the changes over the course of the year in how he was defended.

“They definitely rolled safeties over, corners started playing outside leverage”, he told reporters after today’s practice, from video on the team’s website. “Hopefully I have a more diverse route tree, and then they can’t be cheating so much”.

Back in the middle of November during last season, he has a pretty simple impression of the Steelers’ offense, and his role within it. “He really just tells you what route you have to run and then you run it, and the ball’s there, so it’s pretty easy”, he said in a post-game interview.

Regardless of what routes he was running, though, Claypool was effective on the whole during his rookie season. He caught 62 passes for 873 yards, scoring nine touchdowns as a receiver, and adding two more on the ground. He also caught five passes for 59 yards and two more touchdowns in the Steelers’ lone postseason game.

A second-round pick out of Notre Dame, he was not slow to make an impact. He had an impressive 28-yard catch down the sideline in the opener, then secured the win with a fourth-down conversion on the ground. A week later, he scored an 84-yard touchdown, and then broke out with a four-touchdown game in Week 4.

His role, usage, and success did have some ups and downs over the course of the season, but he is expecting the road to be smoother in year two, as he grows. “Just confidence. Don’t let anything get into my head. Always have the same routine preparing for each game. Just confidence”, he told reporters. “The game’s slowed down, playbook, recognizing coverages”.

Though the Steelers retain JuJu Smith-Schuster, Diontae Johnson, and James Washington from last season, it wouldn’t be in the least bit surprising if Claypool emerges as the superstar from this group. He is certainly the most physically gifted, which is always a good place to start from. Add in knowledge of and dedication to the game, and that’s what separates you from the pack.