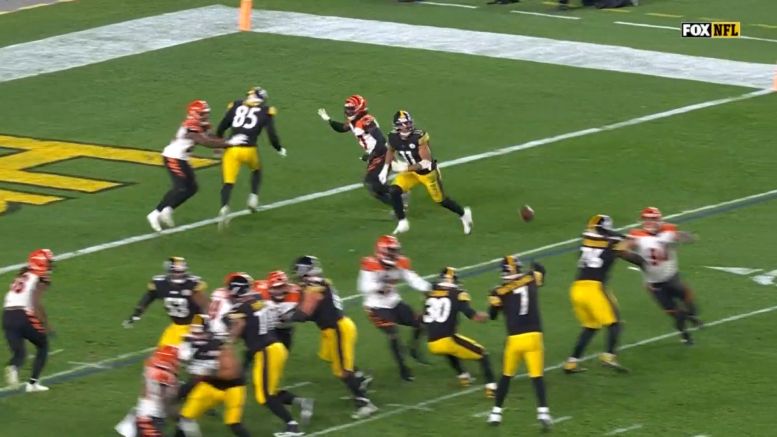 Over the course of the past three weeks—at least, in the second halves of the games—the Pittsburgh Steelers have morphed firmly into a pass-first offense, even going so far as to run an extensive amount of plays without a running back on the field, utilizing an 01 personnel formation: four wide receivers, one tight end.

One of the biggest reasons that they have turned to this package is because it essentially turns the game over to quarterback Ben Roethlisberger, who has five options to throw to on every play that will stress the defense, force them to commit assignments, and frankly, will probably lose at least one matchup.

By and large, he is running his own plays out there, as we have heard in recent weeks, and Chase Claypool said that today’s game featured more of the same. “He always throws out a little something in his book, calling plays that we never ran before”, he told Aditi Kinkhabwala. “But he tells us what to do and it always works out”.

“He tells us what to do and it always works out,” rookie Chase Claypool says of Ben Roethlisberger. As always, thank you for the time, @ChaseClaypool. #Steelers pic.twitter.com/Iq1StUzMCB

“Probably both of my touchdowns were because he called that”, he added, referring to the improvised play-calling at the line of scrimmage. “He really just tells you what route you have to run and then you run it, and the ball’s there, so it’s pretty easy”.

While Claypool did not have a hugely efficient game—he only caught four passes on 10 targets—he did produce 56 yards on the four balls that he was able to reel in, and two of them went for touchdowns, giving him seven receiving touchdowns in nine games, and nine offensive touchdowns overall.

Roethlisberger finished the game with 333 passing yards and four touchdowns, both season highs, completing 27 of 46 pass attempts, this coming after a poor start, completing just five of his first 10 passes for a smattering of yards, one of which lost yardage, over the first four possessions.

They started going more uptempo after that, including the three-play, 74-yard drive that led to their first touchdown, which started with a big 46-yard strike to Diontae Johnson, who finished the game with over 100 yards, the first 100-yard receiving game of his two-year career.

Claypool had the Steelers’ first 100-yard receiving game of the season back in week five when he caught seven passes for 110 yards and three receiving touchdowns, plus another rushing touchdown. This is the second multi-touchdown game of his career.

These young weapons have thrived in Roethlisberger’s hands, and you can include veteran tight end Eric Ebron in that, who in recent weeks has shown the ability to work well with his quarterback on those ad-libbed plays after the snap.