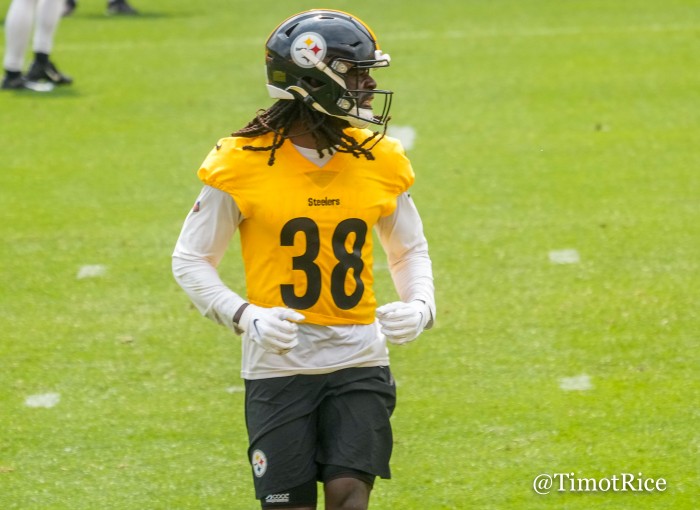 While combing through the numerous storylines of the first few days of training camp put together by Steelers Depot’s very own Alex Kozora, one name I saw pop up several times was CB Stephen Denmark. Denmark signed a futures contract with Pittsburgh on January 21 this year after spending the last two seasons with the Chicago Bears who selected Denmark in the 7th round of the 2019 NFL Draft.

He sent his entire first season on the practice squad and signed a futures contract with Chicago in 2020 but failed to make an impact with no preseason action due to the pandemic and was hence relegated back to the practice squad in 2020. Chicago released Denmark halfway through the season and Cleveland snatched him up shortly after but released him in early December.

Much like Justin Layne who was a former WR who converted to CB in college, Denmark is fairly raw at the position, having only played as a defensive back for two seasons in college before transitioning to the pros. He stared at Valdosta State, a Division II school in Georgia where he shined as a phenomenal athlete when matched up with the competition he was pitted against. Our scouting report highlighted Denmark coming out as an athletic freak, standing 6’2, 217lb and ran a 4.46 40-yard dash time and leaped 43” in the vert at his Pro Day in 2019.

Combine that with being known as a track and field star in HS and in college along with his collegiate production of 107 total tackles, 17 PBUs, and seven INTs in two seasons playing a new position, you have yourself an intriguing player that will be a little raw considering the competition level he faced and a position change, but oozes upside and potential thanks to his physical gifts.

Kozora highlighted Denmark a couple times in his first training camp diary posted this week, stating Denmark and UDFA Mark Gilbert used their length well in coverage to force incompletions. We see Denmark’s length and size as a big factor in coverage like on this play where Denmark goes for the jam in press coverage but allows the receiver an inside release, getting behind him initially on the go route. However, Denmark uses his speed and stride length to open up and close ground on the receiver, getting his hands up in the receiver’s face and closes the distance between he and the intended target to make it difficult for the receiver to reel in the grab.

Obviously, I wouldn’t have been nice to see Denmark use better technique from the get-go, but it’s reassuring that he didn’t panic and used his superior length and athletic traits to still make a play.

Kozora highlighted that Denmark was one of the defensive backs to get on the JUGs machine before practice with the mindset of forcing turnovers being evident thus far by Teryl Austin. We see Denmark’s background as a WR on this play where he turns back to the underthrown ball and snags it out of the air like a WR would, showing off his impressive catch radius and length to come down with the ball, coupled with the athleticism to become a runner and shake out of one tackle attempt and get to the sideline for the return TD.

Kozora also highlighted a double team between Denmark and 7th round draftee Tre Norwood where they took WR Anthony Johnson to the ground on a special teams play. This matches up with Denmark’s skillset and demeanor, as he shows great physicality at the LOS in press man coverage, using his length extremely well to knock opposing receivers off their route and disrupt timing. This is applicable to the special teams’ aspect as well which is something Kozora highlights as a key for Denmark to stick on the roster. Check out this play in press coverage from Denmark’s college days where he takes a receiver to the bench on a brutal jam Mel Blount-style.

When it comes to run support and tackling, this is where Denmark shines thanks to his size and athleticism. He has no qualms about coming up and smacking someone in the face, looking to be a hammer on a nail when coming downhill. Check out this play where Denmark peels off of coverage on the boundary to attack the receiver running the quick out route, leveling him off of his feet and into the turf on the big collision.

Now watching more of Denmark and hearing what Alex had to say in his practice report had me thinking, “What is the real difference between he and Justin Layne at this point?” Sure, Layne played better competition at Michigan State and was drafted in the 3rd round pack in 2019 compared to the 7th, but Layne too is extremely raw as a former WR convert who only has 117 defensive snaps played thus far in his career with minimal production to show for it. Denmark is definitely the more aggressive run defender and brings that special teams’ contribution you need to see to make a roster.

He also has similar, if not better ball skills than what Layne has showcased thus far during his time in East Lansing and in the pros.

Is it far-fetched to say that Denmark could overtake Justin Layne with a good showing this preseason? Personally, I would say no, as I think a case can be made that Denmark provides the exact same skillset Layne does at a bigger size and with a more aggressive play demeanor.

I would honestly like to see Denmark get some work at strong safety and line up in the box to come lay the boom against the run or try and cover backs and tight ends out of the backfield as he gives off a similar vibe to Patriots S Kyle Dugger who too was a former D-II prospect who dominated his competition and is trying to transition to the NFL.

Obviously, Denmark is raw and needs work in his technique and play recognition, but that comes with reps and Denmark is going to get that here in training camp practices and in preseason action this year. Needless to say, I’m going to keep my eyes peeled for Denmark in the Steelers preseason games to see if he can capitalize on his talent and opportunity to turn it into production on the field.

What are your thoughts on Stephen Denmark? Do you think he is merely a camp body, or do you think he has a legitimate chance to make an impact this offseason and potentially push a guy like Layne off of the roster? Please leave your thoughts in the comments section below and thanks again for reading!