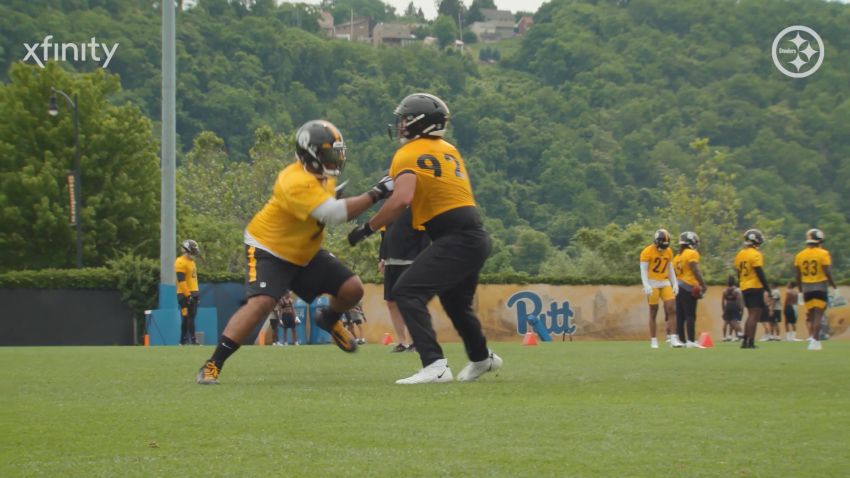 We haven’t really gotten much of a chance to see him yet, but there certainly has been a lot of talk already about the Pittsburgh Steelers’ newest defensive lineman, 2021 fifth-round pick Isaiahh Loudermilk. That’s partially because they traded a future pick in order to get him.

It’s also partially because he has now, multiple times, been compared to a young Cameron Heyward, the Steelers’ four-time Pro Bowler at the position, and their defensive captain. Defensive coordinator Keith Butler made the comparison just after the draft. Tyson Alualu did it just yesterday. Heyward, the man himself, was asked about it yesterday.

“I don’t ever try to compare guys”, he told Missi Matthews following practice. “I think Isaiahh’s got a great background. He’s a prototype 3-4 end. But my thing for him is, make your own legacy. Don’t just try to be the next Cam Heyward or Brett Keisel. Make sure your technique is sound, but it’s an ever-growing process. You don’t ever want to overload a rookie, but he’s got the body type to do it”.

Back-to-back days in pads for the #Steelers before the off day tomorrow. @CamHeyward joined me live after #SteelersFest practice and called me by my “real” name 🤣 #SteelersCamp #HereWeGo pic.twitter.com/HG32wNq1sW

A 6’7”, 293-pounder out of Wisconsin, when you look at Loudermilk, you see a 3-4 defensive end for sure, as Heyward said. He’s got a couple of inches on Heyward, but they’re at about the same weight. Stephon Tuitt is an inch shorter, but has a bit of a weight advantage.

Of course, Heyward was a star player in college and a first-round pick out of Ohio State. The only reason Tuitt wasn’t a first-round pick coming out of Notre Dame as an underclassman in 2014 is because his injuries resulted in his stock taking a hit.

From that perspective, it’s certainly unfair, in a sense, to compare a rookie fifth-round pick to a young Heyward, especially understanding how the ‘older’ Heyward has developed into one of the generation’s premiere players at this position.

But comparisons are one of the most direct tools that we have at our disposal to gain insight into a player about which we know little, and there are some surface-level comparisons that can be made between the two. That doesn’t mean their careers will parallel one another—though Heyward himself didn’t even start until a quarter of the way through his third season.

That’s all outside of Loudermilk’s control, though. He can’t decide what others say about him or on his behalf. He can only control what he does on the field and in the classroom. He can only be the best Isaiahh Loudermilk he can be, and if that by happenstance resembles a young Cameron Heyward, then, well, there are worse things in the world.