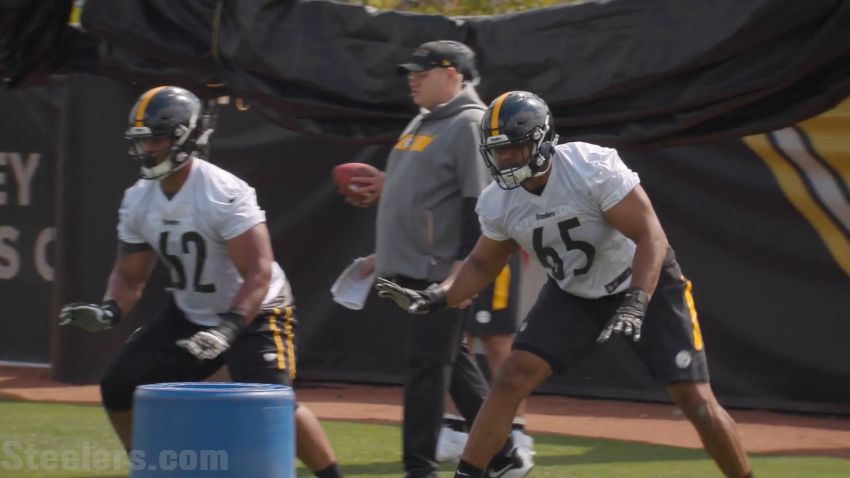 More often than not, the Pittsburgh Steelers have found a way to draft teammates in recent years. In 2017, for example, it was Cameron Sutton and Joshua Dobbs. A year later, James Washington and Mason Rudolph. Devin Bush and Zach Gentry followed. This year, it was Texas A&M bringing two players to Pittsburgh via the fourth round.

The Steelers picked up a new tackle, Dan Moore Jr., with their first of two picks in the round, their fourth consecutive offensive player drafted. The defensive shift in their focus began with his teammate, inside linebacker Buddy Johnson, who recently talked to Missi Matthews for the team’s website about what it means to go into the pros together with his teammate.

“I know Dan as a guy I can always count on”, he said. “I remember back when we were working out, and we were in COVID-restricted workouts. It was just me and the older guys. We had to be the leaders of the team, because most of the workouts were player-led”.

Any advantage you can find as you try to break into the league is a lifeline, and having a college teammate with you has to be a significant help, a trusted confidant with whom you can share your questions and concerns.

They may not share the same side of the ball, but both were leaders for the Aggies. As Johnson talked about, their bond grew through the complications provided by the pandemic last year, somewhat remarkable given how COVID-19 was something that had otherwise kept us apart.

“It was amazing, and I found out just because I was doing media at the time, and they said his name, and they said ‘we’ll have Devodrick Johnson up next’”, Moore said about being drafted with his teammate, and how he found out after his conference call ended, back in May.

“I’m like, ‘Huh’? So I checked my phone and went back outside and everybody’s like, ‘They got your teammate, the linebacker.’ That’s really exciting. Me and Buddy, we’re really close. We hang out a lot, we work out together. That’s my guy. Regardless of him playing on the other side of the ball, we’re still tight”.

Devodrick, of course, is Buddy’s birth name, which he told Matthews nobody calls him—or at least, not for long. He said, in so many words, that he won’t fully acknowledge a person until they call him Buddy, which even his teachers called him. He suggested that perhaps he should formally change it. But either way, he’s already Buddy in Pittsburgh, and has brought a buddy along with him.