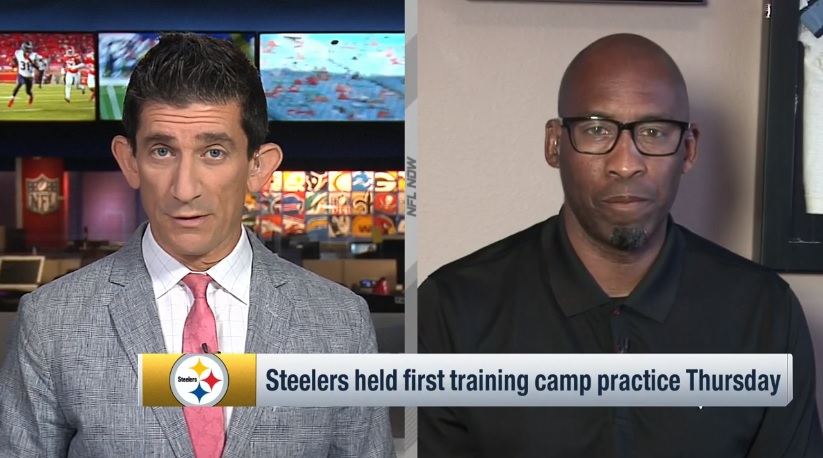 Many in the national media are turning a cold shoulder to the Pittsburgh Steelers’ chances this season. But not all of them. Some, like NFL Network’s Bucky Brooks, believes the Steelers remain strong AFC contenders. He joined NFLN’s Andrew Siciliano to offer his thoughts on the black and gold.

“I have to buy the Pittsburgh Steelers,” Brooks explained. “Because one thing that we know that they have is they have an elite defense. That defense has played at an outstanding level and that defense can carry the load.”

The Steelers’ defense should be the stronger unit of the two sides even after the losses of Bud Dupree, Mike Hilton, and Steven Nelson along with Vince Williams’ recent retirement. Pittsburgh did well to sign OLB Melvin Ingram to give itself quality depth and rotational player. They still boast a strong front seven and an All-Pro safety in Minkah Fitzpatrick. The measure of this unit will be in its young secondary pieces – guys like James Pierre and Antoine Brooks Jr. – along with their run defense. No team runs the ball as often or as effectively as the AFC North. Stopping Baltimore and Cleveland’s ground game late in the year will be critical to their success.

Brooks then pivoted to what he needs to see out of the Steelers’ offense.

“The thing that you want to see from the Pittsburgh Steelers is can they control the game offensively? Meaning, can they take the ball out of Ben Roethlisberger hands? Can they give it to maybe Najee Harris and this revamped offensive line? And run the ball and run when everyone knows that they need to run it.”

The Steelers were the league’s worst short-yardage rushing team last season, converting on 3rd/4th and 1-2 only 50% of the time. The NFL average is much closer to 75%. If Pittsburgh can muster even an average run game this year and maintain a similar and slightly improved passing game, the offense will be much more effectively.

Leading the offense this year is new OC Matt Canada, his first year in such an NFL role. He’ll bring his college flair that made him successful, though Canada’s never been one to stay at one job for too long. Brooks talked about what Canada can bring to the Steelers.

“Matt Canada takes over the offense. He wants to do some of the things that I’m sure he did in college. Jet sweeps motion, lots of shifts and misdirection. Those things really put the defense on their heels and if they can get Najee Harris, who I believe is a back very similar to Le’Veon Bell in his prime. And do the things that Le’Veon Bell was able to do, absolutely, the Pittsburgh Steelers were being the conversation as one of the teams. They could be left standing at the end.”

We recently reviewed Maryland’s 2018 offense and noted the amount of jet plays and pre-snap motions he ran. Yesterday, Ben Roethlisberger said Canada’s offense has increased the number of run-formations. How much the Steelers increase their run game and more importantly, its effectiveness, remains to be seen. But it’s hard to be any worse than a year ago with a brand new offensive line and a first-round running back.