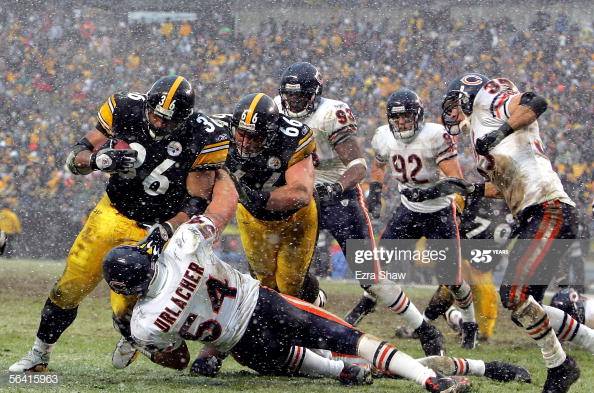 Hall of Fame running back Jerome Bettis had quite a few memorable runs in his career with the Los Angeles Rams and Pittsburgh Steelers. You’d be hard-pressed to find one more memorable than his 5-yard touchdown run against the Chicago Bears on December 11, 2005.

If you want to show someone a play that symbolized all that Bettis was about as a battering-ram running back, show them the play in which he barrels over Bears’ defensive back Michael Green and then steamrolls Hall of Fame linebacker Brian Urlacher to score the iconic touchdown in a win that propelled them on an 8-game winning streak that resulted in a Super Bowl XL championship.

Good Morning Football’s Kyle Brandt coined the phrase “Angry Runs” a few years ago, and recently broke down the top 10 angry runs in NFL history with former NFL running back Maurice Jones-Drew. In the duo’s countdown, Bettis’ run came in at No. 8 overall.

“You know this run if you’re a Bears fan, you’re a Steelers fan,” Brandt said introducing the run on the countdown. “Watch Jerome Bettis is 2005 pass Israel Idonije, he’s gonna run right over Mike Green, and then here comes another Hall of Famer…that’s HOF on HOF, Bettis versus Urlacher, the most memorable run probably of Bettis’s career. Incredible, incredible play.

Bettis running over Urlacher will hold a special place in the heart of every Steelers’ fan, considering how iconic and impactful it was, coming in Bettis’s final season in which the Steelers went on a magical run from 7-5 late in the year to a Super Bowl XL win, becoming the first No. 6 seed in NFL history to win the Super Bowl.

That game also holds a special place in the heart of this writer, since it was my first Steelers’ game I attended. Add in the snow and the memorable run and it will never leave my memory.