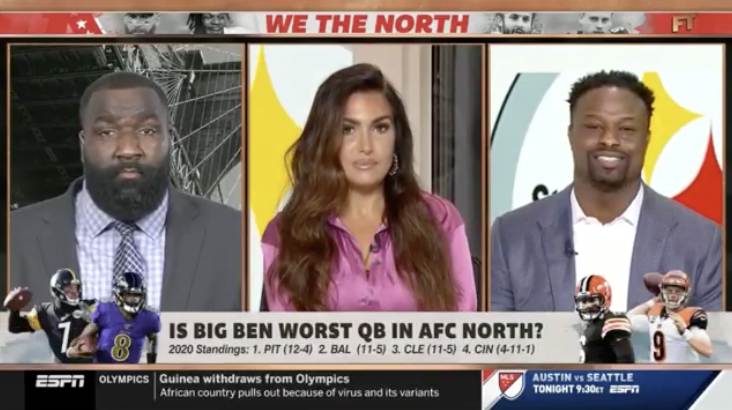 As we enter what is likely the final season of an illustrious Hall of Fame career for Ben Roethlisberger, the hate and criticism of his play on the field has seemingly never been louder.

Through all the discourse surrounding the veteran quarterback, one voice has emerged recently defending the 18-year veteran, refusing to label him as the AFC North’s “worst” quarterback. That would be former Baltimore Ravens and New York Jets linebacker turned ESPN talking head Bart Scott, who knows a thing or two about battling with Roethlisberger and the Steelers over the years.

Scott appeared on ESPN’s First Take earlier this week with former NBA center and champion Kendrick Perkins as the two filled in for Stephen A. Smith and Max Kellerman. Quickly, the discussion turned to the AFC North and the rankings ahead of the season, leading to host Molly Qerim asking the pair if Roethlisberger was the “worst” quarterback in the AFC North ahead of the 2021 season.

“Not at all. I mean, listen, listen, greatness comes in every shape and size and much like Giannis is, Big Ben is greatness. He won’t be appreciated until he’s gone,” Scott said. “Then you talking about a guy that’s a two-time Super Bowl MVP, a two-time Super Bowl champion, a bonafide Hall of Famer. I get it, he led his team to 11 and oh last year before the wheels fell off. Well, why did the wheels fall off? The wheels fell off because he’s coming off a Tommy John surgery. And usually when pitchers have Tommy John surgery on the elbow, what did they do, Molly? They put them on the innings restrictions. What did the Steelers do? They threw the ball almost 50 times a game, right? His arm got weak. And there’s the weather. Inclement weather got worse that he couldn’t throw the ball, cut the ball through the wind and the elements.

“They had no running game,” Scott added. “This year, he’s going to have a running game this year. He’s going to be rejuvenated. Listen. It’s a bunch of quarterbacks in this league that’ll play well past the age of 39. You’re talking about, you know, Warren Moon. We sit in here applauding Tom Brady and his avocado toast or whatever he’s eating already. Well, I’m sorry. He doesn’t eat bread. It’s avocado ice cream. And then we didn’t want to throw the same hate on Big Ben. Big Ben is made out of everything that those guys are right? You all know his resume speaks for itself. He’s a guy that’s never had a losing record. Right? I don’t know why the hate is so big on Big Ben and the Steelers in general. When has the Steelers ever had a losing record underneath Mike Tomlin? I’ll wait. Okay. So why do we pick on the star quarterbacks and start believing in Cleveland? Come on, man. You’re killing me, Petey.”

There’s certainly a lot to unpack here, and I can’t believe I’m about to type this, but I agree with Bart Scott.

Though he’s remiss in thinking Roethlisberger is a two-time Super Bowl MVP, he certainly is a two-time Super Bowl champion and has a lengthy resume that will put him into the Pro Football Hall of Fame on the first ballot. Roethlisberger did not have Tommy John surgery in 2019 though, and his arm did not weaken down the stretch as Scott believes. Instead, defenses adjusted to all the underneath stuff the Steelers were running due to a lack of a running game and a porous offensive line.

This year though, the Steelers should have an improved rushing attack with Najee Harris in the fold, along with an emphasis on power football up front with a completely rebuilt offensive line. Roethlisberger should be able to manage the game well, like Scott pointed out later in the segment like a late career John Elway or Peyton Manning in Denver, both of whom relied on a strong rushing attack and good defenses to win Super Bowls.