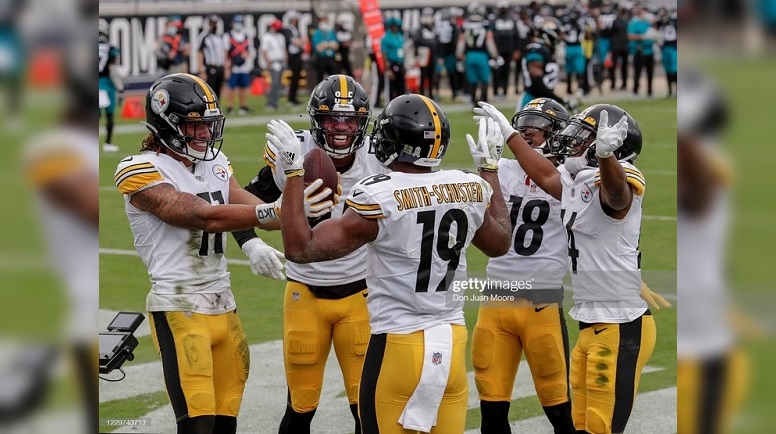 On Tuesday, ESPN’s Bill Barnwell ranked the NFL 1-32 based off the strength of their offensive weapons. Receivers and running backs, not accounting for QB play, offensive line or scheme. The Pittsburgh Steelers were listed almost smack dab in the middle at 15th place. That’s down two spots from a year ago.

In his article, Barnwell explained why the Steelers dropped off despite having the same wide receivers and addition of first-round pick Najee Harris.

“I’m not as optimistic about Smith-Schuster, who had one of the most spectacular sophomore seasons in league history and then followed it with an injury-hit 2019. He didn’t return to his 2018 self in 2020 and averaged just 8.6 yards per reception while fumbling three times. Diontae Johnson needed 144 targets to get to 923 receiving yards…”

Smith-Schuster’s route tree was significantly shortened last season in the Steelers’ quick-pass attack, becoming their de facto running back in an offense that was incapable of handing the football off. While he’ll still be used in the quick-game this year under new OC Matt Canada and his horizontal offense, the goal will be to expand his route tree to something closer to 2018 levels. He may also play on the outside a little bit more than he has in recent seasons, though make no mistake, he’s still by far the team’s top slot receiver.

Johnson wasn’t the most efficient player last season. But Barnwell also notes the offense and Ben Roethlisberger’s struggles to throw downfield are worth taking into account (even if he’s trying to exclude these factors from his study). If Johnson can cut his drops by about half, from the 13-15 range to 6-7, and otherwise play the same, he’ll have a strong third year.

Overall, the Steelers’ strength of the offense is its wide receivers, and hopefully the play of a talented running back like Harris. They need to play like the strength of the unit, which means consistent improvement and certainly a decrease in the number of drops. But the skill positions are the guys to be worried least about. The focus is on the play of a basically brand new offensive line and how they come together individually and as a group.

The Steelers’ offensive weapons still have something to prove, and the NFL is absolutely loaded with great receiver talent, but they should be closer to #10 than the middle of the pack. Barnwell seemed to acknowledge that at his conclusion.

“If we somehow get the Smith-Schuster from 2018, the Claypool second-year breakout and the Harris who looked unstoppable at Alabama all at the same time, the Steelers could make this ranking look silly.”

Smith-Schuster bouncing back, Claypool ascending, and Harris playing well? All three things that are more than attainable.

Pittsburgh was ranked behind the likes of Baltimore (#14) and Cincinnati (#13). Since his article is discounting scheme, line, and quarterback, it’s hard to put the Steelers behind either of those two teams. Cleveland finished fourth.

At #1 were the Super Bowl champs Tampa Bay Buccaneers. The Kansas City Chiefs, without the inclusion of Patrick Mahomes, finished all the way down at #6. Bringing up the rear were the Houston Texans, widely considered to be the worst and most rag-tag team in the league.