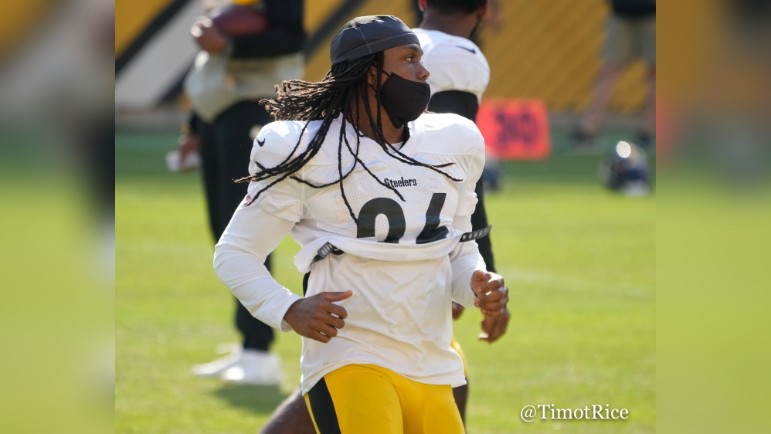 Matt Canada’s offense of pre-snap motion, jet runs, and lots of window dressing isn’t just something to draw up on a whiteboard with X’s and O’s. We should talk about the personnel too along with the schematics. One guy benefitting from Canada’s influence on this offense is RB Anthony McFarland. It’s hardly a surprise. McFarland succeeded under Canada in 2018 at Maryland. They’re reunited, Canada hired last year and promoted to OC this season in replacing Randy Fichtner.

He’s brought that college flair to the Steelers’ offense. McFarland has benefitted more than maybe anyone else. He’s logging serious playing time, even with the team taking Najee Harris in the first round. Pittsburgh has run probably two dozen “Pony” backfield plays with Harris in the backfield, and McFarland (or occasionally, another back like Jaylen Samuels) split out wide. Those moments often end with the split out back motioning across the field on jet action to either take the ball on a handoff or become window dressing and eye candy.

McFarland has the speed and big-play ability to be a threat on the edge for perimeter runs. Though it didn’t come on that jet action, he broke the biggest run in camp yesterday, racing 40 yards into the open field past CB Mark Gilbert and the rest of the Steelers’ defense. Canada’s offense will be built on constraint plays. Ones that look the same pre and post-snap but end up by getting the ball in different players hands. Give the jet to McFarland one play, fake it the next and handoff to Harris, then fake the jet and the handoff and throw it the next.

The downside is two-fold. One, putting McFarland and two running backs on the field means taking someone else off it. Be it a third receiver like Chase Claypool or JuJu Smith-Schuster or a second tight end like Pat Freiermuth. You lose a blocker too, though the window dressing often occupies a defender. And McFarland being on the field is red-alert for the defense. Pittsburgh’s defense now routinely calls it out when #26 is split out wide. You can bet opposing defenses will do the same.

McFarland will get to play in his first preseason after not having any exhibition action last season due to COVID. He should align as he has in practice, even knowing a guy like Harris will not see many — or any snaps — in Thursday’s Hall of Fame Game against Dallas.