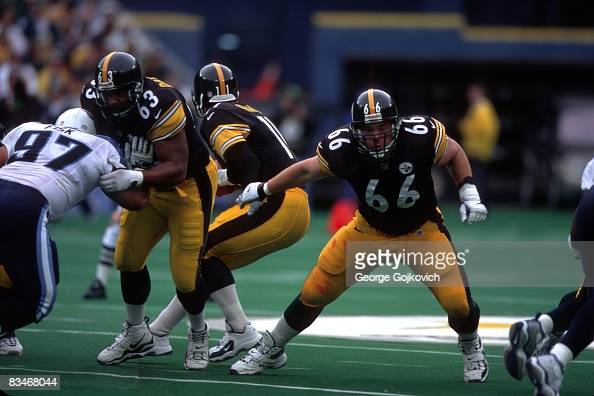 When the Pittsburgh Steelers drafted guard Alan Faneca 26th overall in the 1998 NFL Draft out of Louisiana State University, then-Director of Football Operations Tom Donahue figured he would be grabbing a starting guard for the next decade.

Donahue figured right, drafting a future Hall of Famer in Faneca, pairing him next to an aging future Hall of Fame center in Dermontti Dawson, setting Faneca up ton a career trajectory that would put him in the halls of Canton, while getting a crash course on being a pro next to Dawson.

While lined up next to Dawson for two seasons, Faneca learned the pro game quickly and took one key thing away from Dawson’s game: watching him pull as a center.

Though Faneca would never play center, he was able to watch the All-Pro pull time and time again at a high level, making a huge impact in the Steelers’ vaunted rushing attack in the late 90s.

Speaking with reporters ahead of his Hall of Fame induction, Faneca talked about seeing Dawson pull up close and personal, along with the impact the All-Pro center had on him as a young player entering the league.

“I can remember a story where, it’s a summer, a summer training. We’re just in there at Three Rivers [Stadium] going through it, no pads. And the job was for Dermontti or I to pull, and I was like, ‘no way can Dermontti get this guy. I totally ignored what he had said,” Faneca added. “And I blocked, I blocked down on a two-technique, which is just inside of me. Coach yells at me, he tells me to get out of there. So we get down on the line of scrimmage again, and I do the same thing. No way Dermontti could get this guy. He’s totally a man removed from them. Same thing happens. Coach just comes over there, just yelling at me. And I was like, coach. And he’s like, just go. And I was like, all right, I’m just pulling. And sure enough, I pulled the next time and I looked back there and Dermontti’s not only got the guy, he’s just totally whooped him and sealed them off. And I was like, I was like, alright, hands off; Dermontti’s got it from there. And, uh, that was an eye opening day for me watching him do that. And from that point forward, I’ve always had my eyes on him.”

What a cool story that is from Faneca, one I’m sure none of us have ever heard about he and Dawson interacting from the late 90s. Faneca had to learn the hard way just how good Dawson was, not only at pulling, but at reaching defensive tackles on down blocks to replace a pulling guard.

As we’re all aware, Dawson truly revolutionized the center position with his ability to pull from the middle of the offensive line, completely changing the Steelers’ shape of its blocking scheme in the run game.

Following Dawson’s retirement at the end of the 1999 season, Faneca became the face of the Steelers’ offensive line, leading one of the top rushing attacks in football before the Steelers changed their look again once a young, gunslinging Ben Roethlisberger rode into town.

Fittingly, it was Faneca pulling and kicking out a defensive lineman in Super Bowl XL, sending Willie Parker on his way to a Super Bowl-record 75-yard touchdown, giving the Steelers their fifth Super Bowl title in franchise history.