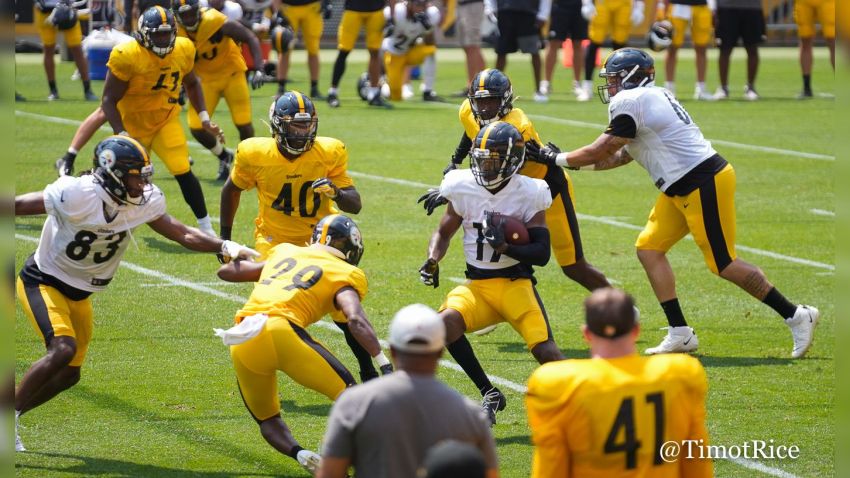 The Steelers tend to fluctuate between carrying five and six wide receivers, having chosen to carry only five last season. Ray-Ray McCloud was the number five, behind JuJu Smith-Schuster, James Washington, Diontae Johnson, and Chase Claypool, who will continue to make up the top four in 2021.

The rest have nothing guaranteed, even if McCloud figures to continue to be favored for the fifth spot after having some success as the Steelers’ return man for both punts and kicks last season. Smith-Schuster also suggested that he is the second-best slot receiver on the team, behind himself.

Even assuming that McCloud does make the team, however, that still leaves open the possibility for another. Anthony Johnson and Cody White both spent time on the Steelers’ practice squad last year, and the former had drawn some buzz in the spring. He has made some plays in training camp, as well.

Mathew Sexton and Tyler Simmons were both players who were signed in late winter/early spring, former draft declarations who returned to their alma maters to perform at Pro Days, after which they earned contracts for themselves.

Rico Bussey and Isaiah McKoy, on the other hand, are rookies. They are not draft picks, but signed as college free agents following the draft. Bussey in particular is a name that intrigues, especially when you factor in the possibility that injuries are what knocked him out of the draft.

Is there room for a sixth wide receiver on the 53-man roster? And what will the Steelers look for in that player? First and foremost, we must know, is special teams ability. If he’s not going to play in the third phase of the game, then, like Deon Cain last season, he might as well be on the practice squad.

A number of these guys, like Johnson and Bussey and White, could fall into that role. Right now, though, from a fan perspective, they’re all kind of one indistinguishable mass. It will be in the preseason, if at all, during which they begin to separate themselves.