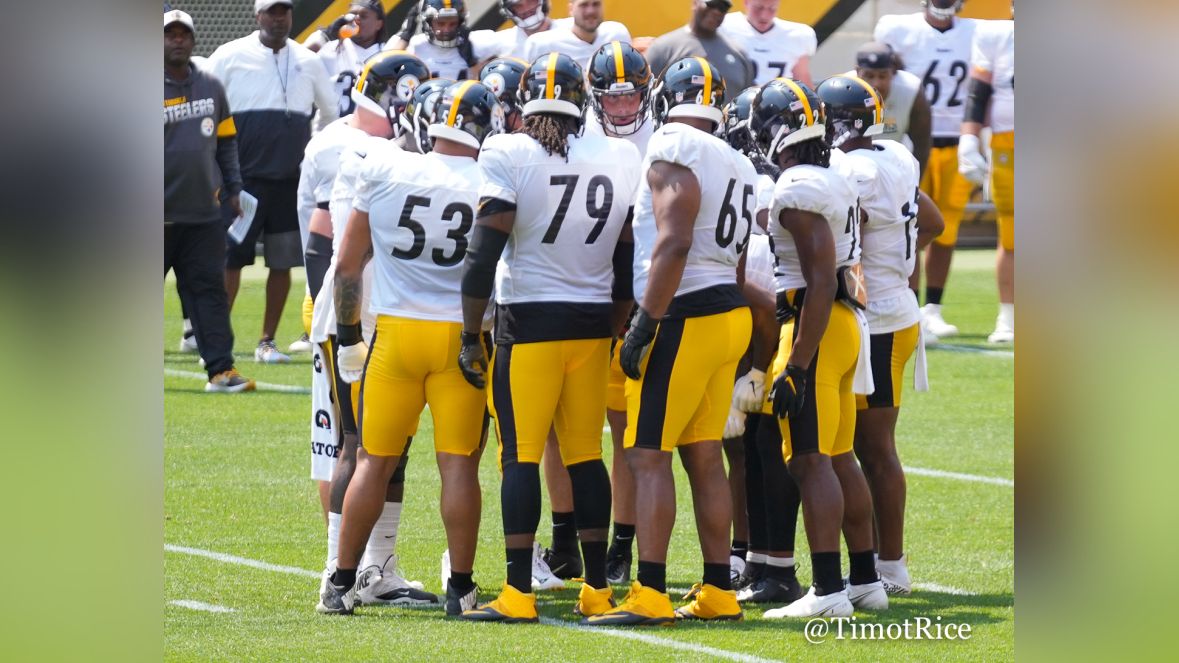 Day One of Pittsburgh Steelers’ training camp (in pads) is in the books. Really good day yesterday and it was great to be back out at camp for the first time in two years. But now it’s time to focus on football and not the warm and fuzzies of camp.

Here are some things (weather permitting, looks like rain is coming) to look for with a day under our belts.

– No standouts or anyone who especially struggled yesterday. More of a run-focused day. Ben Roethlisberger was full yesterday so he’ll probably have a half-day Thursday. Will create more reps for everyone else. Most interested in seeing if Dwayne Haskins will still run ahead of Josh Dobbs or if those two will rotate. Dobbs didn’t get a single rep in team session yesterday. If that doesn’t change, or if he’s getting just the remainder of reps, that’s not a great sign for him, even knowing they need to get a longer look at Haskins than Dobbs.

– Overall, good day for the group yesterday. Anthony McFarland got a lot of burn, both in the backfield and as a gadget/jet player for Matt Canada’s offense. The backup to Najee Harris right now. Kalen Ballage impressed in pass pro and showed vision on zone runs. Seeing if all those guys can stack good days. And how much more Pony (2 RB) sets the team runs.

– Will Eric Ebron practice after suffering an elbow injury? If not, more reps for young guys and those who really need it. Pat Freiermuth didn’t have a bad practice yesterday but things were different with the pads coming on. Took his lumps in backs on ‘backers (they won’t do that again today, probably will only happen one other day of camp) and Alex Highsmith whooped him good in one run session. But Freiermuth was competitive and made a big catch downfield. Now that he has a better taste for NFL speed and physicality, let’s see how he responds.

Zach Gentry caught up on a lot of missed reps yesterday. He should continue to get plenty of them. He’s battling Kevin Rader for that #3 job. Gentry has the size and made impact plays as a receiver but his leverage as a blocker will be his biggest challenge.

– Didn’t have a lot to note from this group from yesterday. Mathew Sexton made the play of the day of any receiver, a 20+ yard grab down the right sideline. He and Tyler Simmons were active in pre-snap motion and jet runs. But not much to takeaway from Day One. Just looking and waiting for someone to step up and make a high-level catch in team drills.

– Keeping an eye on participation. When do Zach Banner and Chukwuma Okorafor get to work in team drills? When will Kevin Dotson and JC Hassenauer be in pads? Will Anthony Coyle practice after yesterday’s stinger? That will shape the look of the lines. Pittsburgh basically ran only two lines yesterday when they normally have three because of all the injuries.

– Like Freiermuth, Dan Moore Jr. got a taste of what the league is like versus Alex Highsmith. Rashaad Coward is going to have to work on punch and placement to have more success against Cam Heyward. Aviante Collins had a decent outing yesterday. And Chaz Green will need to take advantage of the few reps he’s gotten. Didn’t look good yesterday.

– This will be one of the fun battles to watch. Lot of depth, lot of youth, lot of competition. Want to get a better feel for the rotations behind the starters (and if Stephon Tuitt practices). Abdullah Anderson is a name I specifically want to keep an eye on. Flashed a bit in OL/DL yesterday but snaps and reps are hard to come by.

– Lumping the EDGE and off-ball players together. One guy I thought had a nice practice yesterday I didn’t mention too much in yesterday’s notes was Jamir Jones. Ran 2nd team ROLB, opposite Cassius Marsh and ahead of Quincy Roche. He’ll go back to third-team when TJ Watt jumps into team drills (when that’ll happen, I don’t know) so he needs to take advantage of these increased reps. Showed strength against the run and some pass rush juice.

– Melvin Ingram had one snap over the A gap. Will that continue? Going to keep an eye on it. And Alex Highsmith had a strong first day but can he have similar success against non-rookies?

– For the off-ball players, didn’t have a great sense of how that unit performed yesterday. Just happy to see Devin Bush in team drills and he moved well. Carried Chase Claypool vertically is a big ‘ol checked box to his athleticism coming off the torn ACL. Robert Spillane started opposite of him with Marcus Allen and UG3 the second-stringers. Want to look at those guys a bit closer.

– Who will start in the slot? Might be a rotation going on here with Antoine Brooks Jr. and Arthur Maulet. Brooks ran with the 1’s to start camp, Maulet started there yesterday. I tend to like Maulet there better, more of a natural fit, but it’s an open battle.

Maybe it was because I barely watched WR vs DBs yesterday but I never noticed Shakur Brown. Noticed the other corners but not him. Mark Gilbert and Stephen Denmark made plays on the ball yesterday. Both had breakups. Let’s see if they can keep that up and if others like James Pierre and Justin Layne can do the same. And who comes away with the first INT of padded practice.

– More difficult position to gauge. But anyone who can make a big stick or an opportunistic play in coverage will be worth writing about. Miles Killebrew can come downhill against the run. Want to see him more in space. Donovan Stiner and Lamont Wade are the third-team duo at safety…can either of them shine?