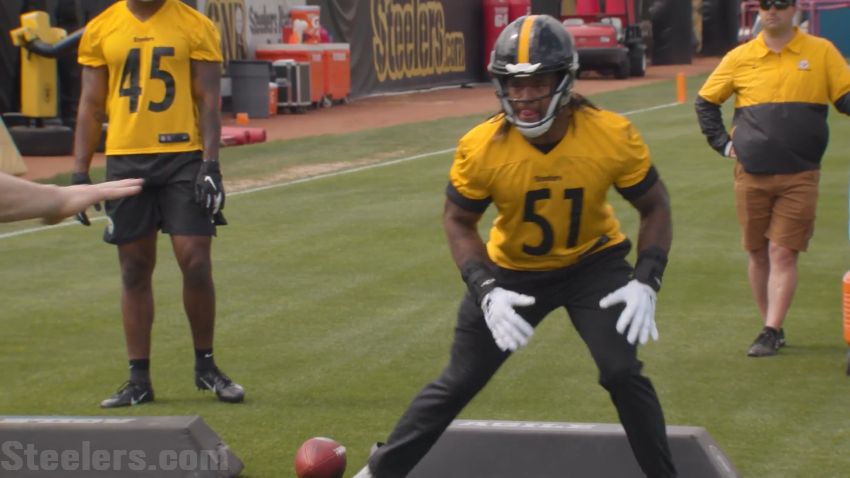 Coming off of a 2020 season that saw the Pittsburgh Steelers decimated by injuries at inside linebacker, General Manager Kevin Colbert knew he needed to address depth at the position, either through the 2021 NFL Draft or via free agency.

Fortunately for the Steelers, Colbert did both, adding rookie Buddy Johnson out of Texas A&M in the fourth round and re-signing veteran Vince Williams to a cheaper contract one month after cutting him as a cap casualty.

Breaking down the selection of Johnson in his draft review piece on Steelers.com, Williamson gave kudos to the Steelers for taking advantage of a deep off-ball linebacker class, landing a talent like Johnson in the fourth round, grabbing an athletic guy who has a knack for making plays all over the field.

“What really stands out about Johnson is how he flies around the football field, an approach that might need some fine tuning at the NFL level,” Williamson writes. “He plays with great energy nonetheless and impressed at Texas A&M’s pro day by running the 40-yard dash in 4.57 seconds with excellent jump numbers. Johnson has a flare for making big plays and is a true striker.”

Though it appears Johnson won’t see the field much defensively in 2021 — barring injury — he has a high ceiling as a potential compliment to Devin Bush starting in 2022. For now, Williamson sees Johnson as more of a special teams piece for the Steelers in 2021, which feels accurate, considering at best Johnson is the fourth ILB on the roster behind Bush, Williams, and Robert Spillane this season.

After searching for depth at a position that is so critical to the success of the Steelers’ defense, Williamson believes the Steelers have found that depth, which should allow the Steelers to play more nickel next season, one year after playing nickel just 40% of the time, resulting in Pittsburgh playing more than six defensive backs 11.7% of the time, which was the second highest in the NFL behind only the New England Patriots.

“Who is to say how quickly Johnson, who should play a ton of preseason snaps, acclimates, but he has a chance to really help that situation by giving the Steelers another young talented option as well as being a foundational special teams player in 2021,” Williamson writes.