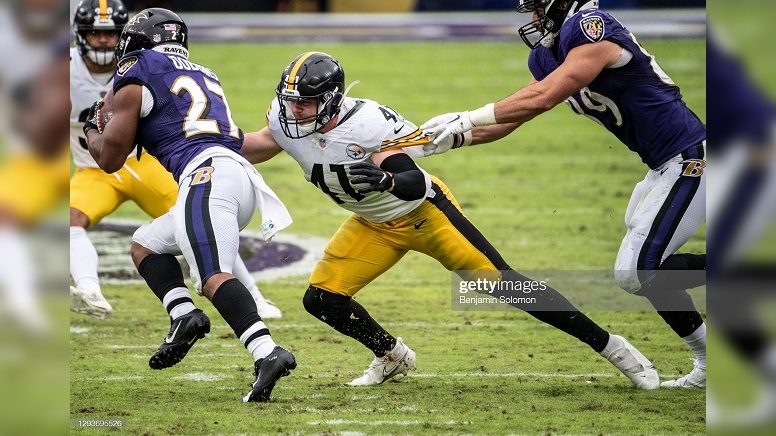 If a silver lining comes out of any injury for a franchise, it is getting a chance to see what somebody else can do when the opportunity presents itself. Last season, that opportunity for the Pittsburgh Steelers went to Robert Spillane. An undrafted inside linebacker cut by the Tennessee Titans after one season, Spillane entered his second Steeler season as an afterthought at the position behind first-rounder Devin Bush and the long-tenured Vince Williams. But then Week 6 happened.

Bush suffered a season-ending ACL injury. Someone had to replace him, and Spillane was the next man up. A little-thought-of player when 2020 began, Spillane did well with the opportunity and made himself part of the discussion for the defense in 2021. Receiving 377 defensive snaps in 2020, Spillane spoke about the chance to use what he learned in 2020 to continue improving this coming season.

“I look to continue to improve, as everyone on this team does,” Spillane said during a Thursday media session following OTAs. “You find things in your game that you can improve on, and having that experience, that film from last year, I can look at things and decide, ‘This is something that I need to clean up, or something that I do well that I want to do even better next year.'”

Playing alongside Williams as the team’s two primary linebackers following Bush’s injury, Spillane recorded 38 tackles in his seven starts alongside Vince Williams. He led the team in stops in two of those games, the team’s two matchups against the Baltimore Ravens. Over the course of the entire season, Spillane finished with 45 tackles (four for a loss), four passes defensed, a fumble recovery, and an interception returned for a touchdown.

Spillane’s season is remembered in part for those Baltimore games, and in part for a signature tackle on third down against Tennessee Titans’ 2,000-yard rusher Derrick Henry, stopping Henry short of the end zone on a play at the one-yard line.

He was looking at chances to add more to his 2020 opportunity, but suffered a season-ending injury in his seventh start, against Washington. His performance was more than just a big hit on the NFL’s best running back and a couple strong showings against one of Pittsburgh’s biggest rivals.

It was an unheralded player stepping up and seizing his opportunity, and making himself part of the Steelers’ future at inside linebacker. Working in OTAs and the rest of the offseason, Spillane says he is using what he learned and his film from his 2020 opportunity to improve his performance in 2021.

“There’s lots of aspects to work on throughout any offseason, but especially having that film last year and that point of reference, I can go back and look at certain techniques and abilities that I’ve been working on this offseason,” Spillane said.