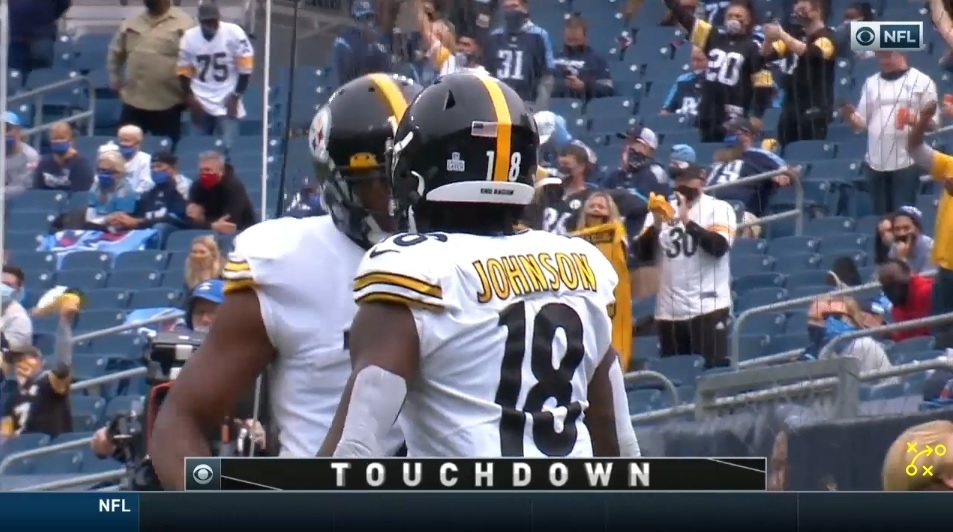 In 2020, we started a new summer series to look at some players that were poised to have a breakout season. This is a look at those players who have been productive to this point in their careers but could be on the verge of busting out and getting more national recognition. Last year’s list included Terrell Edmunds, Cameron Sutton, Stephon Tuitt and James Washington. This is a breakout candidate for the 2021 season.

The mandate to improve the running game has been heard, understood and acknowledged in 2021. The Steelers’ first four picks in the draft were all on offense and showed a focus on that mandate. However, in the NFL passing is king, and the Steelers are well equipped for that, as well.

The production from Johnson has been solid overall and in 2020 he showed increases in the majority of statistical categories. Including the playoffs, he has played in 32 games, starting 26 with 236 targets and 147 receptions totaling 1,603 yards and 12 touchdowns. He also led the league in punt return average as a rookie with a 12.4 yard average and one touchdown.

He had big shoes to fill taking over the X receiver position after Antonio Brown was traded to the Raiders, but he has stepped up and shown he has the ability to be a number one receiver. There has been one glaring issue in his game to this point and that is drops. In two seasons, he has had 19 catchable passes go through his hands. The good news is it doesn’t seem to be a physical issue with his hands, but more of a mental issue of not looking the ball in before trying to make a move upfield.

Injuries have also slowed his progress a bit dealing with a few issues in his two seasons. He had surgery to fix a sports hernia after his first season and last year dealt with a concussion and calf issues that caused him to miss some time.

In his second season, it became evident he would be the number one target. He led the team in targets with 144 and hit double digit targets in 10 games. No other receiver reached double digits more than four times and he missed all or most of three games. In the other 13 regular season games he averaged 10.85 targets per game and 6.69 receptions.

On the Steelers he was also second in yards, third in touchdowns and yards per reception and fourth in yards per target. He was ninth in catch percentage.

Compared to other receivers that were in the top 20 in the NFL in targets his numbers were below the average in most categories.

Per Pro Football Reference, he had nine fewer receptions despite six more targets than the average. His yards per reception average was nearly two yards less, but some of that had to do with the Steelers’ less-than-creative passing game. Yards per game, catch percentage and yards per target were also all below average. His yards per target average was dead last in the top 20. Even lower than Smith-Schuster (6.49).

Stop the Drops – Thirteen drops in 2020 and nineteen in two years is an area that must improve. Johnson has come out and said he drops were mental not physical so this should be something that can be fixed. Looking at the top 20 players in receptions last year other than Johnson, the number of drops ranged from one (Davante Adams) to eight (Stefon Diggs, Tyler Lockett and DK Metcalf) with an average of about five per receiver. Based on last year’s stats if he can get he drops down to five that would bring his catch percentage closer to 67% and he would have had 96 receptions and 1,007 yards.

Avoid the Bug? – So far in his short career he has been hampered by some injuries. He is the best route runner, most elusive after the catch and the receiver that gets targeted the most. He needs to be able to stay on the field.  In the three games he missed time the target leaders were Eric Ebron (seven), James Washington twice (seven) and Claypool (11). In the 13 full games he played last year he averaged 10.84 targets, 6.77 receptions and 71 yards per game. If he could stay healthy for 16 games, that will translate to 173 targets (which would have lead the league), 108 receptions and 1,136 yards.

Canadian Influence – Changes are coming to offense. At least they should be. Offensive Coordinator Matt Canada said this week that the coaches’ job is to get everyone in position to make plays, but they’re also going to do what Ben wants. Canada has shown flexibility in his previous coaching stops to adapt to the personnel. If Canada is able to get Johnson in more advantageous situations we could see that yard per reception average go up closer to the 12 yard range like the top 20 average. Based on the aforementioned 108 receptions a 12-yard average would put him at 1,296 yards.

The mandate was to run the ball more effectively but that doesn’t necessarily mean run the ball more. It could but there is no guarantee. Over the last five seasons Roethlisberger has averaged 38.9 passing attempts per game and the running game has averaged 24.5 carries per game. Even if they come down to 35 passes and 28 runs there are still plenty of targets to go around.

Johnson has the skillset to be a more productive receiver. I think the drops will come way down this year and with offensive adjustments his numbers will get a nice boost this season. Health can’t be predicted but we can hope for the best. A 100-reception, 1,300-yard, 10-touchdown season should be within reach.