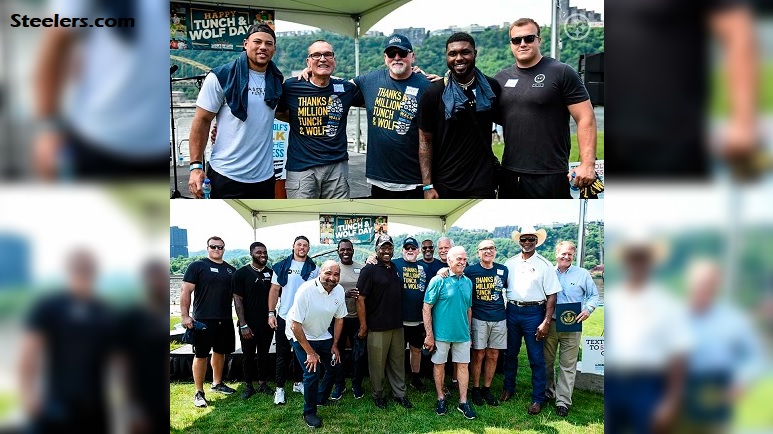 Today was a pretty special day for a pair of longtime teammates, broadcast partners, and friends. For Tunch Ilkin and Craig Wolfley’s 19th annual Walk for the Homeless, Pittsburgh mayor Bill Peduto and Allegheny County Exectuive Rich Fitzgerald are renaming June 13th “Tunch and Wolf Day” in their honor.

The Mayor issued a Proclamation to Mr. Ilkin in recognition of his retirement from the @steelers & decades service to our community. pic.twitter.com/M8IMsuc7gA

Steelers.com’s Teresa Varley covered the event and what it meant today meant to the community. Light of Life Rescue Mission Doug Smith spoke with the team site.

“We can’t even put into words how grateful we are as an organization for the two of them,” Smith said. “The challenge in today’s world is how many players actually stick around a city for 35 years. I think what is special is, and Tunch always shares the story, is that he walked into Light of Life as a player. There are a lot of charities you can go to as a player, but he said once he walked through the doors of the mission, he has never been the same.”

Due to a lack of time to plan, the actual walk wasn’t held this year, though it’s likely to return for 2022. But according to Varley, many Pittsburghers showed up on the North Shore to hold their own walk. In total, the event raised over $100,000.

Had a great time at the 19th Annual Tunch Ilkin & Craig Wolfley's walk for the homeless. This walk supports @lightoflife Rescue Mission. You two are true heroes @steelers
THANK YOU Tunch for taking me under your wing and showing me how to do things the right way. Love u brother pic.twitter.com/pjHD13AJSx

“He might even be mad we are honoring him. It’s never been about him, it’s been about serving the most vulnerable men, women and children.”

Ilkin has been a staple of Pittsburgh since his playing days here began in 1980. After his playing days were over, he soon got into broadcasting and served as a Steelers’ color analyst since 1980. Wolfley has served as a sideline reporter for many years and the two have long been close friends. Wolfley was Ilkin’s teammate from 1980 to 1989.

A few weeks ago, Ilkin announced he was retiring as a broadcaster to focus on family and his health. The Steelers have not named his replacement but whoever they select will have big shoes to fill in and out of the broadcast booth.