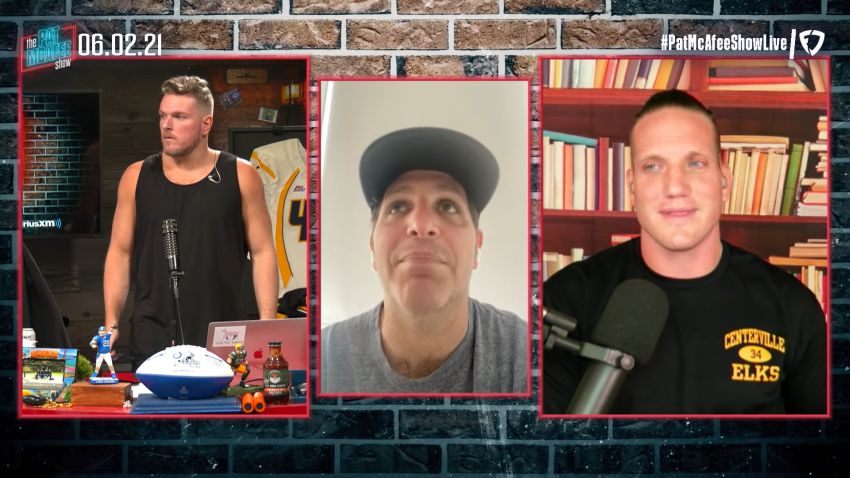 I’m sure that when you woke up this morning, you were not only hoping, but expecting, to be reading about the backup quarterbacks on the Pittsburgh Steelers’ roster. It’s time to deliver on that expectation by highlighting a conversation on Pat McAfee’s show that took place yesterday, reflecting Ben Roethlisberger’s comments on Haskins from Tuesday.

“Ben comes out and says ‘Dwayne Haskins is awesome’. This might be a very new Ben Roethlisberger, might be a very new Steelers”, McAfee said on his show. “Is Dewey Haskins the answer over there? I assume he’s better than the guy who will be notoriously known as The Guy Who Ate a Helmet One Night”.

That would be a reference to Rudolph, of course, who had his own helmet used against him as a weapon by the Cleveland Browns’ Myles Garrett in 2019, which remains the most notable moment of his career.

“Rudolph was a 2018 third-round pick by the Steelers, while Haskins was drafted in the first round by Washington in 2019. So how did he get here in such a short span of time? “He made some terrible decisions, ends up with cheeks in his face, and he gets fired”, McAfee joked — though it’s not really a joke.

He then brought on Pete Schrager to discuss the situation, and Schrager had some interesting things to say about the backup quarterback position, and Rudolph in particular, whom the Steelers earlier this offseason signed to a one-year contract extension through 2022.

“Mason Rudolph did sign the contract, they did bring him back, and I know a lot of people in the NFL think Mason Rudolph can be a starting quarterback someday”, he said, a remark that was met with surprise and some derision. “He looked good Week 17 against the Brownies. He played well in that game. He was slinging it”.

Rudolph is 5-4 in nine career starts over the past two years. He is 201-for 326 passing with 2,089 yards, throwing 15 touchdowns to 10 interceptions. Those aren’t terrible numbers, and he did throw for over 300 yards in his one start last season.

“The Steelers have been through the Landry Jones Experience, Duck Hodges, Haskins is the next guy, great”, Schrager said. “Last year in the offseason there was a lot of whispers that maybe Jameis comes in as a backup to Ben and takes over, maybe Cam — they didn’t. And so now Dwayne Haskins and Mason Rudolph will battle it out to see who’s the next guy, but I would think Mason Rudolph right now is the two”.

That has long been the assumption, of course. Haskins was only signed to a Reserve/Future contract, and will have to earn his spot on the 53-man roster, first and foremost, competing with Joshua Dobbs, who has four years of experience in the Steelers’ system. But I have a hard time believing there are many people who think any of them are future starters.