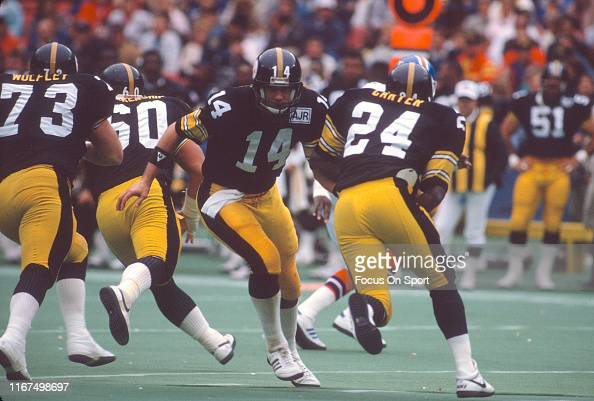 Often in this series, I focus on the Steelers from the 2000s or late-90s. But I recognize there are older, wiser Steelers’ fans who want to remember some guys from the 80s too. Hopefully Todd Blackledge jogs your memory. He was one in a long list of “80s Steelers quarterbacks” the team trotted out there in the years after Terry Bradshaw’s retirement.

Blackledge had some Pennsylvania pedigree. He starred at Penn State, leading them to an 11-1 record in 1982, winning the National Championship in the Sugar Bowl over #1 Georgia. Selected by the Kansas City Chiefs, he became the seventh overall pick of the ’83 draft, taken ahead of the likes of Dan Marino, who the Steelers infamously passed on for Gabe Rivera. So maybe acquiring Blackledge was the team’s way of trying to grab a QB from that ’83 pool. Too little, too late.

After failing in KC, Blackledge became a free agent in 1988. But because free agency didn’t exist in the form it does today, the Chiefs still held his rights. Rumors began to swirl Kansas City was going to trade him, and Pittsburgh was doing everything they could to be their dance partner.

Here’s an excerpt on March 25th, 1988 from the Sun-Sentinel about trade talks.

“The Pittsburgh Steelers said Thursday they’re making progress with the Kansas City Chiefs in obtaining quarterback Todd Blackledge. Gary Heise, the Chiefs’ public relations director, said the two teams are “fairly close” to completing a trade, but Steelers Business Manager Joe Gordon said, “Fairly close would be an exaggeration. We’re making progress.” For a trade to be made, the two teams must agree on compensation and Blackledge must sign a new contract. Blackledge, whose base salary was $440,000 last year, became a free agent in February. The former Penn State quarterback has worked out for the Steelers, Seattle Seahawks, Indianapolis Colts and San Diego Chargers…”

Five days later, the two struck a deal. Pittsburgh sent a fourth-round pick for Blackledge, putting him in competition with Bubby Brister and Steve Bono for the starting QB gig. It helped that Blackledge’s father, Ron, was the Steelers’ offensive line coach.

But Pittsburgh named Brister the starter for the ’88 season. He struggled over 13 games, and Blackledge earned his first start in Week 6 against the Phoenix Cardinals. Playing in 120 degree temps, he completed just eight passes in a 31-14 loss. He’d start the next two games, losing the next versus Houston but picking up the win against the Denver Broncos. Blackledge had two total touchdowns that game. The first, a one-yard sneak at the goal line.

The other, a throw over the middle connecting with RB Rodney Carter.

Brister was again the starter for ’89 and Blackledge would again come in relief for two more starts. Neither performance was impressive. Pittsburgh notched a win against the Browns in Week 6, a bit of revenge after getting blown out 51-0, but Blackledge completed just 9 of 28 passes with one touchdown and one interception. He and the Steelers’ offense were shutout by Jerry Glanville’s Oilers the following week. By their next contest against Kansas City, Brister was back in the lineup, meaning Blackledge was one game shy of facing his former team.

And that was the end of his NFL career. In Pittsburgh, he’d go 2-3 as a starter, tossing twice as many interceptions (six) as touchdowns (three).

He would stay close to the game, becoming a well-known broadcaster for ABC, CBS, and ESPN. He served as a high school basketball coach in his hometown of Canton, Ohio, too.

Todd Blackledge, your blast from the past.