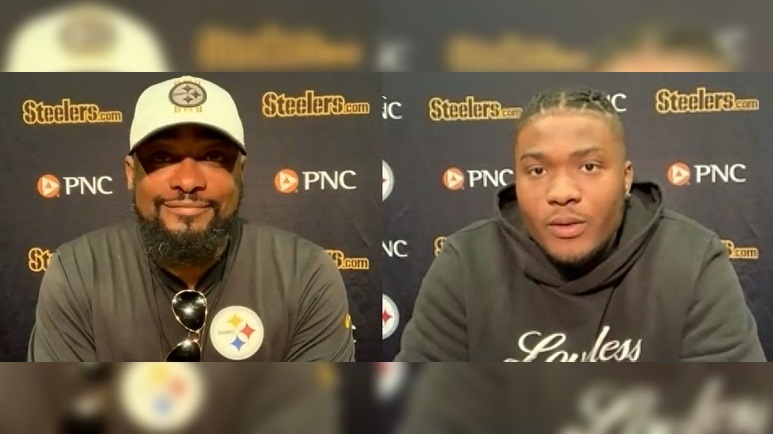 Pittsburgh Steelers quarterback Dwayne Haskins has been and still is one of the most intriguing players on the team’s 90-man offseason roster. Why? Well, it’s obvious, right? He’s a quarterback and a former first-round draft pick who is still very young and has a cannon for an arm.

Tomlin talked openly on Wednesday about the kind of personal investment that he’s putting into Haskins this offseason and how it starts with learning more about the young quarterback as a person.

“Really, I’ve been more concerned about Dwayne the person, kind of getting to know him and getting an understanding of what he’s been through and how that’s shaped him, affected him positively and negatively, how it’s affected the growth and development of his game,” Tomlin said on Wednesday after minicamp practice had concluded. “I think, more than anything, Dwayne and I are just trying to get to know one another. I think it starts there, and then we can focus on some things relative to the game itself. I leave some of the minutia and some of the detail about his football development between him and Sully [Mike Sullivan] and [Matt] Canada. I just want to get to know the young man and help him grow in that way.”

On Thursday, Haskins spoke to the media prior to the team’s final minicamp practice of 2021. During his interview you could tell that he has taken great notice of how Tomlin is investing time in him not only as a player, but as an individual person as well.

“Relationships are everything,” Haskins said on Thursday. “I mean, on the field, off the field, definitely an environment in a certain sense that you have a lot to do in your success off the field. And Coach Tomlin’s been a great guy as far as, you know, being able to get to know me as far as what I need to do as quarterback and then what I need to do off the field and things of that nature. And he’s been very hands-on with me in our communication. And just grateful for a Hall of Fame coach to take the time that he’s taken as far as helping me out. And he’s made that known to me. He’s been a great, just motivator. Just being able to talk to me.”

Tomlin is of course not only working with Haskins to get to know him better, but he’s also spending time with the player aspect of the quarterback as well.

“We play defense, and he talks a little stuff to me on defense and stuff like that,” Haskins said of Tomlin on Thursday. “He tries to get me to throw the ball into coverage and I’m learning not to do that.”

Haskins obviously was under a lot of pressure when he was Washington. That’s not surprising with him being a first round draft pick, and a quarterback at that. The support system that he had in Washington right out of the chute probably wasn’t all that. His rookie season was followed by a complete overall of the Washington coaching staff. That couldn’t have been easy for him. Yes, Haskins has made plenty of mistakes both on and off the field since he was drafted. Hopefully he has learned from all of them equally. It had to be quite a humbling experience to get jettisoned from the team that drafted him just two seasons after being picked in the first round.

To hear Haskins talk on Thursday, it almost seems like a huge weight has been lifted off his shoulders. He seems relaxed and why wouldn’t he be? He’s not currently considered one the team’s top two quarterbacks on the depth chart and thus not expected to carry an entire offense, or even entire organization, on his shoulders right now. He now has the opportunity to blend in more and begin rebooting his career slowly and under the watchful and helpful eyes of a very experienced head coach in Tomlin and a very experienced quarterbacks coach in Mike Sullivan, who is very structured in his approach.

With the Steelers’ mandatory minicamp now in the books, Haskins has several weeks ahead of him to continue to get himself ready for training camp and the preseason. Currently, Haskins is perceived to be battling quarterback Joshua Dobbs during the remainder of the summer for the right to have the third string job behind Roethlisberger and Mason Rudolph. Haskins will also have more free time in the coming weeks to spend with Tomlin. Based on what he said on Thursday, we can probably count on him staying in contact with the team’s head coach leading up to training camp getting underway.

“So, he’s been great,” Haskins said of Tomlin on Thursday. “He’s a lot of fun and everything that I’ve heard about him has been True and everybody loves him around here, so I see why.”

If Tomlin and the rest of the Steelers organization can somehow find a way to turn Haskins into a bona fide franchise quarterback in the next two seasons, it will show that genuine care and concern about disposed of pedigree players can sometimes yield amazing results. Results like winning the lottery with a ticket that someone else discarded, lost or just plain gave up on.