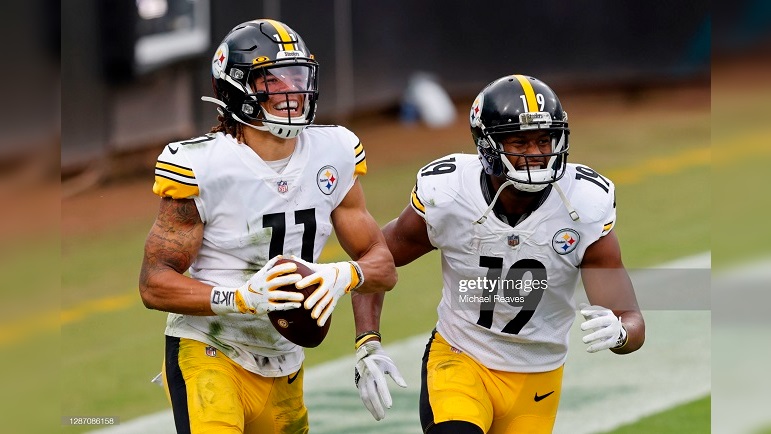 Today I am starting my “Wide Receiver Study Series”, similar to my “Quarterback and Running Back Study Series”.  With more time this offseason, I wanted to dive deeper into some questions I usually don’t have time for. One of these questions revolved around receiving success.  Two datapoints came to mind that I wanted to learn from in this study:

Before the graph comes up, this is important!  The chart below is viewing EPA, Success, and pass plays only, so this is a simple starting view.  Another goal of this study was to start with the elements I thought added the most value to the team in the receiving game (adding points and success in the pass game along with usage).  With that in mind, here’s what 2020 looked like: 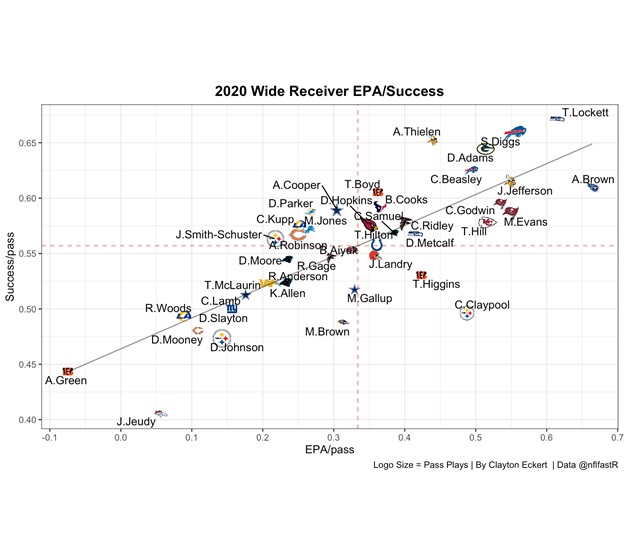 I really enjoyed the outcome of this graph.  This view gives us great context of team value as opposed to using a general yards stat (not all yards are created equal).  For example, the Steelers had three receivers all in the top 20 in Pass Plays (binary indicator if the play was a pass).  As many of us know, that doesn’t always lead to team success.  Shoutout to several people on the Steelers Depot crew, there have been awesome articles recently that put this into great context also.  Even though I am echoing some thoughts I’ve seen from our other contributors, here are some thoughts on how the Steelers can maximize their receiving corps in 2021:  Juju = deeper route utilization to balance with the short game, Claypool = building consistency and versatility in year two, and Johnson = focus on the catch, then run.  (I wrote this up just before Diontae Johnson’s minicamp interview, so it was nice to hear him say “catch first, run second” as a focus goal).  These things seem reasonable to expect, so I have optimism the Steelers receivers will improve in 2021 with another year of experience together (very young group).

Also, I was curious to see which teams had the most usage/success with their personnel, and how many Wide Receivers qualified per team.  I know there will be some names that we don’t see here, but it’s important to remember that these are the top Wide Receivers in Pass Plays.  The table below is an illustration of that:

Interesting results!  Now we have context of team results in the pass game, then the quality of play that player gave with the most opportunity in the pass game.  So, the teams that got the most pass usage from multiple Wide Receivers, then by Success/pass were: (2WR): Seahawks, Bills, Vikings, Bucs, Falcons, Rams, and Bears.  (3WR): Bengals, Cowboys, Panthers, and then the Steelers.  With another year together, and my optimism in my previous studies, we should see an improvement in success for 2021.

Let’s take a look at who did the best with the most opportunity (for Pass Plays value):

The main takeaway for the Steelers is connected to a takeaway from the “Quarterback Series”: quality over quantity with Big Ben.  I hope this will apply to the receivers also, seeing more EPA and Success (quality) rather than all three being in the Top 20 in Pass Plays (quantity).

Taking the above information, I will rank them for 2020 by: Pass Plays for usage, Success/pass for quality, and EPA/pass for winning value:

Fun ending question, how will the Steelers Wide Receivers fare in 2021?  Thanks for reading and let me know your thoughts in the comments!