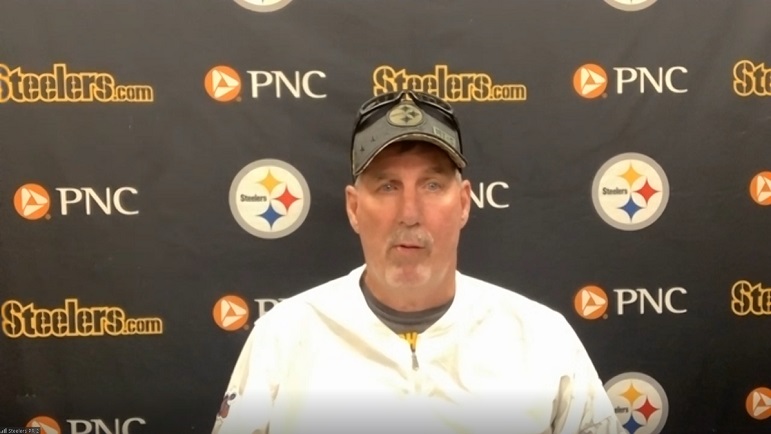 For now, the Pittsburgh Steelers have Cassius Marsh as their third outside linebacker behind starters T.J. Watt and Alex Highsmith. However, whether or not Marsh winds up being the number three outside linebacker 89 days from now when the Steelers open their 2021 regular season on the road against the Buffalo Bills is a different story and that’s because we could very well see the team add another experienced edge rusher before then. On Tuesday, Steelers defensive coordinator Keith Butler didn’t necessarily shoot down the notion that another outside linebacker might ultimately be added to the team in the coming weeks and months.

“That’s going to be up to Mike [Tomlin] and Kevin [Colbert] to look elsewhere and stuff like that, to give us a little depth right there,” Butler said on Tuesday. “So, we’ll see as we go along training camp and preseason. We’ve got the four preseason games, playing in the Hall of Fame [game] and all that stuff. The good thing about all of that is it gives us a chance to evaluate who we have and who we don’t have. Hopefully we can find somebody that we think is capable of being as good as we have been in the past. So, we’ll see what happens there, and if we need somebody else, I’m sure Kevin and Mike will look around.”

While Butler did essentially tab Marsh the third outside linebacker on the depth chart on Tuesday, along with giving a polite nod to rookie Quincy Roche, the team’s sixth-round draft pick this year, he certainly made it sound like the depth at the position behind Watt and Hightower can still be upgraded significantly.

“But we’re looking for a third guy right now, who’s going to step up,” Butler said on Tuesday. “And hopefully Cassius [Marsh] can give us a little help there, too. So, we’ll see. We drafted the one guy [Quincy Roche], and we think he’s going to be alright.”

Steelers head coach Mike Tomlin was also asked on Tuesday to give his thoughts on the team’s depth at the outside linebacker position and specifically how that unit is essentially one injury away from possibly having Roche being the number three option.

“I could stay up a lot of nights worrying about the potential for injury in terms of attrition, but at the same time, I acknowledge attrition is a part of this game,” Tomlin said. “So, I’m comfortable with who we have working there right now. We’re going to coach those guys up and hope that attrition doesn’t set in, but I have that same mentality about all the positions. It’s just not a lot of depth if you’re talking about injury setting in the way it set in on us collectively at the inside linebacker spot in 2020.”

The Steelers inside linebacker depth chart was of course ravaged in 2020 as both Devin Bush and Robert Spillane went down with knee injuries. Spillane, who made it back for the playoffs, started seven games in a row in place of Bush after he was lost for the season in Week 6. After Spillane went down injured in Week 13, the Steelers were left with newcomer Avery Williamson and converted safety Marcus Allen having to play quite extensively as even veteran Vince Williams missed two of the last four regular season games on the COVID-19 list.

The Steelers reportedly had interest in signing then-free agent edge rusher Ryan Kerrigan a few weeks ago but he ultimately latched on with the Philadelphia Eagles. If that showed us anything, it’s that the team still might be interested in adding a veteran edge rusher to back up Watt and Highsmith.

Our own Tom Mead recently built a list of edge rushers currently on other teams that he believes would fit what the Steelers might be in the market for and especially if any of them wind up being cut in the next three months. While not on Mead’s list, one must wonder if the New England Patriots would be willing to part ways with Chase Winovich in the coming weeks and months. It’s hard to tell if he’s indeed on the outs with the Patriots right now, however.

How will this all wind up playing out for the Steelers and their outside linebacker depth chart? Personally, I still believe we’ll see the Steelers add another outside linebacker between now and the start of the regular season. That’s been my belief for several weeks now as well. In the meantime, however, there’s no real rush for the team to sign or trade for one just yet as the start of training camp is still over a month away.

The team now has two more minicamp practices to use as an evaluation period to see just how comfortable they are with the likes of Marsh and Roche backing up Watt and Highsmith. Starting next week, Steelers general manager Kevin Colbert can begin a more earnest attempt at finding another outside linebacker via the street or trade and I’m willing to bet he ultimately will find what he’s looking for, which is an upgrade over Marsh and Roche.