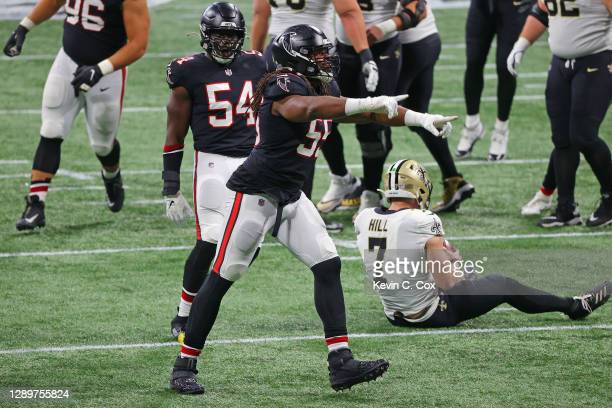 I decided to look at the outside linebacker position spending some time going through the rosters of the other 31 teams to look at their depth and see if I could find some names of players to keep an eye on in other camps this summer that may be on the roster bubble.

I focused on factors such as snap counts, the number of games they suited up for and overall depth of the position from unofficial depth charts that included new additions through free agency and the draft. Affordability was also a factor with the Steelers without a lot of cap room so you won’t see any big names on here.

Each of these seven players would be capable of fighting for the #3 or 4 outside linebacker position. I added some clips to show you them in action.

Johnson was a 7th round pick out of North Carolina A&T where in his final season he led the MEAC conference in sacks, was first team ALL-MEAC, was the Defensive Player of the Year and an AP first team All-American. In three seasons as an Aggie he had 116 tackles, 41 tackles for a loss, 19 sacks and 5 forced fumbles.

With Buffalo bringing in two rookie pass rushers there is going to be plenty of completion in training camp.  Johnson has great length with 33 7/8 inch arms and Lance Zierlein of NFL.com called him a high energy player, aggressive defender able to play on his feet with some usage in coverage.

Banogu was a second round pick in 2019 following a productive career that started at Louisiana-Monroe and finished at TCU.  He had 156 tackles, 45 TFL, 20 sacks and 7 forced fumbles.  The Steelers had him in for a pre-draft visit and our report said he was a high motor player who is explosive out of a three point stance, plays with good pad level and ideal size and length.

In a recent interview the general manager Chris Ballard mentioned every Colt pass rusher other than Banogu. Ballard has had no problem cutting players who haven’t performed (see Malik Hooker) and with Banogu not even dressing for 7 of 9 games to finish the season last year he could be on the outside looking for new employment.

Anae was another player who was very productive in college with 131 tackles, 83 solo, 40 TFL and 29.5 sacks while forcing 5 fumbles. He had a strong showing at the Senior bowl but after a poor showing at the Combine he was drafted in the fifth round of the 2020 draft.

In his rookie season in Dallas he failed to make a big impression. He only had 6 defensive snaps and had no tackles.  He did get some time on special teams with 120 snaps but all of that came in the first half of the season.  He dressed for 7 of the first 8 games but was inactive from week 9 through the rest of the season.

If you look around there are plenty of speculations out there as to why Anae didn’t get much playing time.  Whatever the reasoning 2021 could be a better year for him with a full training camp and a new defensive coordinator. Dan Quinn is replacing Mike Nolan and it should give Anae another chance to impress but with the depth in Dallas it could be tough.

Here is our report from last year.

The former Central Michigan Chippewa went undrafted in the 2018 draft and was signed by the Eagles. He too was also very productive in college (can you sense a theme?) with 220 tackles, 123 solo, 45.5 for a loss, 26 sacks and 8 forced fumbles.

He spent all of 2018 on the practice squad and tore an ACL in 2019. In the preseason game against the Steelers he had 3 tackles. In 2020, he was cut in September by the Eagles but quickly resigned and suited up for three games (weeks 11, 16 and 17).  In his three appearances he had 29 defensive snaps and 42 special team snaps and was credited with 1 tackle on defense. Here is the profile from NFL.com and the quote from one AFC scouting director says, “”He’s got those short legs like a penguin, but don’t let that fool you because he will outwork most of the guys across from him. I would love to see what his fitbit step count is during a game. That guy is constantly moving and chasing and hustling.”

The Eagles have had him for three years so there is something there they like but with the addition of Kerrigan and Jackson there will be camp battles.

Means was a fifth round pick out of Buffalo in 2013 making him the elder statesman on this list (he’ll be 31 in September). As a Bull he put together four solid seasons totaling 186 tackles, 87 solo, 30.5 TFL, 19.5 sacks and 2 interceptions.

He has had a journeyman career with stops with five teams including Tampa Bay, Baltimore, Houston, Philadelphia and Atlanta.  The age is a small concern but considering up until last year he hadn’t played more than 175 snaps total between defense and special teams in might have more in the tank. In 2020, he played all 16 games and had 11 starts totaling 38 tackles and 3 sacks in 643 defensive snaps.  He was also the Falcons nominee for the Walter Payton Man of the Year award for his many community activities.

After his breakout year the Falcons may want to keep him as the veteran insurance but Mingo and Bullard are veteran free agents that were brought in and if they want to go young they have rookies Ogundeji and Kobe Jones.

Spence was a promising young player in the 2016 NFL draft and went early in the second round to Tampa Bay. He originally committed to Ohio State and spent some time there before his one season at Easter Kentucky but had some off the field issues.  His lone season with EKU he had 22.5 TFL and 11.5 sacks.  Here was our report on Spence.

His rookie year started out well playing all 16 games and tallying 22 total tackles and 5.5 sacks. Since then though it has been a struggle for Spence.  He has played in just 25 games over 4 years with just 15 total tackles and two sacks.  He dealt with a shoulder issue earlier in his career and tore an ACL and didn’t play at all in 2020.

The Saints lost Trey Hendrickson this year and it will be difficult to replace his 13.5 sacks but they still have solid depth. Spence may be a bit riskier with his injury history but is a name to keep an eye on.

Fitts was a sixth round selection by the Chicago Bears in the 2018 draft after and spending one year at UCLA before heading to Utah for his final 3 seasons. He finished with 68 tackles, 14 TFL and 11.5 sacks with 11 passes defensed and 5 forced fumbles. Here is the NFL.com profile.

He spent only one season with the Bears playing in 6 games with 58 defensive snaps and 25 special team snaps. He was cut prior to the 2019 season and scooped up 2 days later by Arizona. In his two seasons as a Cardinal he has played in 16 games. He was active for the final 3 games in 2019 and 13 of 16 in 2020 missing two games with a hamstring injury.  Production has been limited with 13 tackles and one forced fumble but he did set career highs with 140 defensive snaps and 227 special team snaps.

Jones is back after bicep surgery and Golden should start on the other side.  Gardeck burst on the scene with 7 sacks and is a good special teamer. Fitts will be fighting for time with Kennard who played over 350 snaps and Dimukeje.