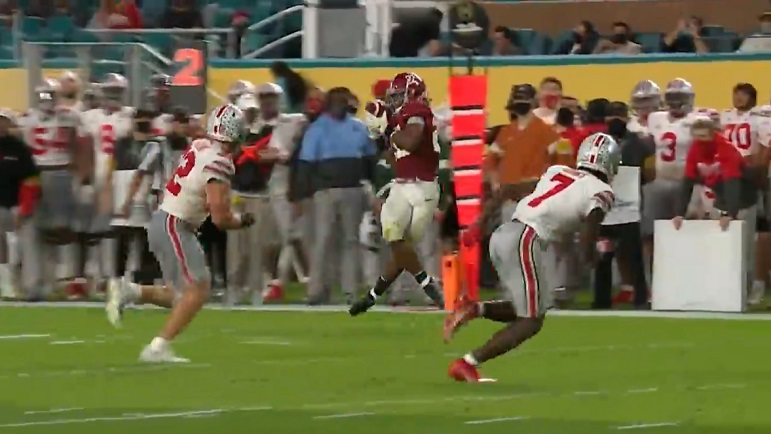 Will new Pittsburgh Steelers running back Najee Harris wind up being one of the NFL’s most impactful rookies in 2021? That’s certainly what the Steelers are hoping for after spending a first-round draft a few months ago on the Alabama product. Bucky Brooks of NFL Media certainly believes that Harris will live up to his billing in 2021 as he named him one of his most impactful rookies for 2021 during a recent segment with Lance Zierlein.

“I think Najee Harris is the one that’s really going to be an impact player,” Brooks told Zierlein. “They haven’t had a runner like this since Le’Veon Bell in his prime, in terms of a legitimate big-time running back that has receiving skills. Najee Harris, to me, is the quintessential number one back. He can run in between the tackles. He can get on the perimeter. He can catch the ball out the backfield. He has some sizzle to his game in big games where he steps up. There’s a lot to like. He doesn’t have the top-end of some of his counterparts, but, man, when you’re that big, that physical, you don’t really need to have exceptional top-end.”

That’s a great description of Harris by Brooks. Sure, Harris isn’t the homerun hitter in terms of 20 yards or longer run like a few of the other highly drafted running backs in this year’s class, but he certainly did pile up runs of 10 yards or longer during his college career at Alabama. He’s also an every-down running back to boot and like Brooks said, should be the best one the Steelers have had since Le’Veon Bell was in his prime several years ago.

The stars certainly are aligned for Harris to get more than his fair share of opportunities to be an impact rookie for the Steelers in 2021. At worst, he should hit 300 total touches if he stays healthy in 2021 and if he plays in at least 16 of the team’s 17 regular season games. That should lead to Harris setting a new Steelers rookie rushing record in 2021 and possibly even a new rookie total yards from scrimmage record as well.

Harris played in a lot of different pro-style offenses at Alabama and under a few different offensive coordinators to boot so hopefully that will make his transition to the NFL a fluid one.

“I’m going to all these zoom meetings in the NFL, and I just know all of the things like this because we learned all that in practice,” Harris said ahead of the 2021 NFL Draft. “We learned all that in film, We learned all that on game day. It just translates so well into the NFL that, you know, sometimes, you know, I wouldn’t even prepare for meetings. I would just know it already because it’s the same terminology as we used, it’s just different names. So, for them [Alabama] to get us ready to play at the next level, if that’s what you want to do, for them to bring in all the guys that they do and if you like competing then, I mean, Alabama is hands down the number one place you want to go for sure to get you ready for the next level.”

So far through the Steelers offseason practices, Harris seems to be as advertised. In fact, Steelers safety Minkah Fitzpatrick gave his former Alabama teammate quite a bit of praise after seeing him up close and personal during the offseason.

“I love Najee, as a man and as a player. He’s a great dude, has a great story,” Fitzpatrick said recently during an interview with Rodney Harrison. “But as a player, he’s a competitor. I love playing him. He’s fast, he’s challenging us out of the backfield, catching passes, going against the linebackers. He has that ‘you’re not gonna outwork me’-type mindset. That’s something that we love having in the city of Pittsburgh”.

Pittsburgh certainly does like having that sort of something on the Steelers and especially when that something comes in the form of a quintessential number one back.