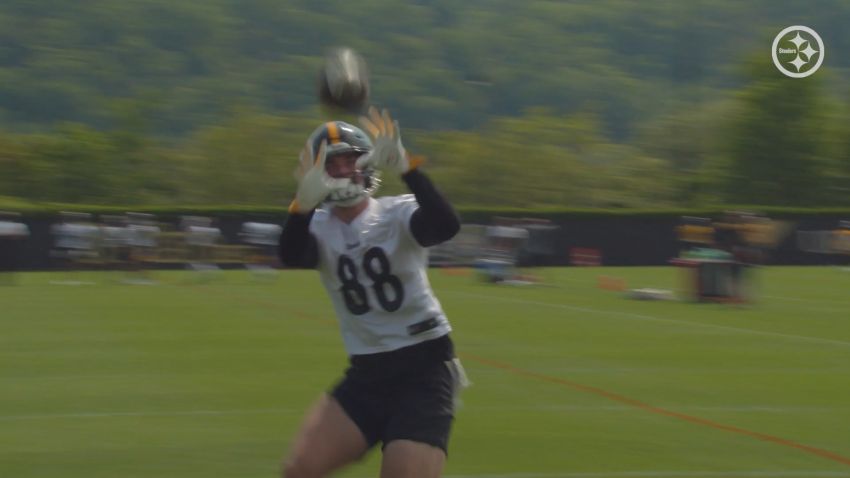 Reasoning: The early reviews on Pat Freiermuth from coaches and teammates have, unsurprisingly, been positive as the second-round tight end acclimates himself to the NFL.

It’s not exactly uncommon to hear praise for rookies in May and June, and this year has certainly been no different following a year of no spring workouts. We’ve gotten positive press about just about every single Steelers’ rookie draft pick, with second-round tight end Pat Freiermuth being no exception.

Arguably the strongest endorsement came from fellow tight end Eric Ebron, who only spent two days with the rookie during mandatory minicamp. He called Freiermuth “silky smooth”, while head coach Mike Tomlin said that all he says is see him make plays.

Freiermuth bills himself as a complete tight end, both a capable receiver and a blocker. The spring sessions without pads are where he gets to show off the former. To his credit, his teammates and coaches are tooting his horn, indicating that he is the real deal when it comes to his receiving ability.

There is still a lot to learn about him as a blocker, though, where he arguably has further to go. Part of that is simply because you’re limited in what you can do in that department without pads. They’ve gotten him on the sled and everything, but that’s just the start.

Of course, we only base our judgements off of what we can know. Since OTAs and minicamp are limited, our frame of reference is also limited. But with that in mind, it is still worth acknowledging the very positive things we’ve heard of the Penn State product.

He comes to the team at a time when Vance McDonald has retired and the Steelers are looking for a complete tight end who can be an asset in the run game as a blocker while also being a dynamic threat as a receiver who is more than just a possession guy.

We don’t know if he’ll live up to that billing, but he is off to a good start, at least.