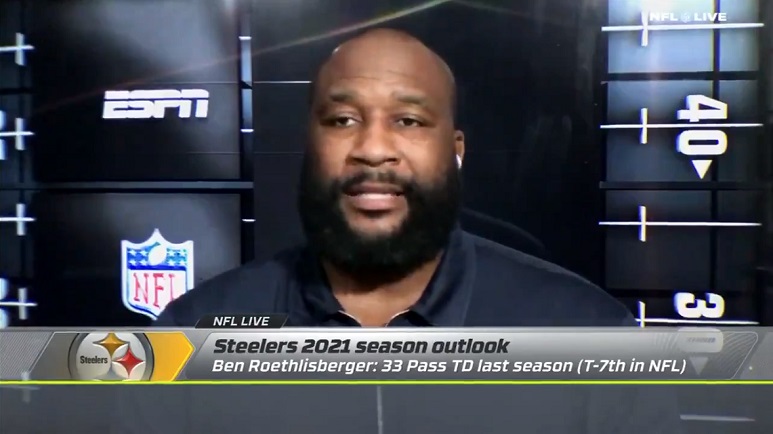 Can Pittsburgh Steelers quarterback Ben Roethlisberger do enough in 2021 to make the team a serious Super Bowl contender if not asked to throw as much as he did in 2020? That’s one question that’s tough to answer. It certainly seems to be the likeliest scenario. Recently, former NFL player Marcus Spears, who is now an analyst for ESPN, chimed in with his thoughts on Roethlisberger and if he still has enough to be a more than effective starting quarterback in 2021.

It’s hard to argue with Spears’ thoughts. Quite honestly, what he said about Roethlisberger and 2021 might be the most intelligent and thought-out comment he’s had on any Steelers player since he went to work for ESPN.

Look, it’s not rocket surgery or heart science when it comes to Roethlisberger and the Steelers being successful in 2021. It starts with the offense being able to run a lot more successful than they have in the last several years. If that happens, Roethlisberger shouldn’t need to throw as much in most games. Additionally, an improved running game in 2021 should help in the time of possession department. The byproduct of that figures to be the Steelers defense being on the field a little less.

The Steelers spent their first four draft picks this year on offensive players. Their first three, running back Najee Harris, tight end Pat Freiermuth and center Kendrick Green, will all be expected to contribute right away as rookies, and hopefully heavily help the offensive running game in the process. If that happens, Roethlisberger and the rest of the Steelers’ skill players should benefit greatly.

“This is about where Ben is in his career,” Spears said. “It’s not about if Ben can throw the ball 50 yards; he can. It’s not about if Ben can operate an offense with his arm at a high level. He can. It’s just when you’re asking him to do it 50 times a game. Without a complimentary run game, obviously we talked about that last year with how anemic they were running the ball out of the backfield. Obviously, they go get Najee Harris in the draft. So hopefully the plan is to become a more balanced offense.”

“Ben Roethlisberger can still play quarterback at a high enough level to put Pittsburgh in a great situation. He cannot do it if you're going to ask him to throw it 50-60 times a game." ~ Marcus Spears #Steelers pic.twitter.com/hYvkbjvZqD