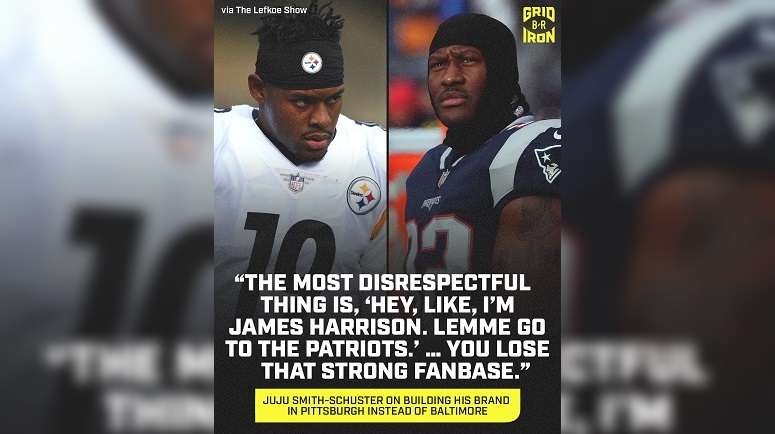 Back in March, Pittsburgh Steelers wide receiver JuJu Smith-Schuster decided to re-sign with the team that drafted him back in March but not after first listening to free agent offers from a few other teams and most notably the Baltimore Ravens and the Kansas City Chiefs. In the end, he left a little bit of money on the table when it came to him deciding to re-sign with the Steelers.

Recently, Smith-Schuster made the media rounds and one of his several interviews was with Adam Lefkoe of Bleacher Report. During that conversation, Smith-Schuster he had an interesting comment about a former teammate of his who went Benedict Arnold, so to speak against the Steelers of few tears ago,

“The most disrespectful thing is, ‘Hey, like, I’m James Harrison. Lemme go to the Patriots.’ You lose that strong fanbase,” Smith-Schuster said on decision to re-sign with the Steelers instead of going to a division rival such as the Ravens.

While Smith-Schuster’s response and him using Harrison as an example is certainly understandable, it’s a little rich overall. First, had the difference in money between what the Ravens and Steelers were offering Smith-Schuster been greater, there is no doubt in my mind that he would be in Baltimore as we sit here today.

The ravens deal was slightly better than what Smith-Schuster got from the Steelers but with that said, there were likely some unlikely to be earned incentives in that deal from Baltimore that would have made it tough for the wide receiver to hit his maximum potential earnings in 2021.

As for Harrisons situation, him signing with the New England Patriots a few years ago came on the heels of the Steelers releasing him after he reportedly asked to be cut due to his lack of playing time. While it was somewhat of a heel turn on Harrison’s part, it wasn’t a move made because of money.

It will now be interesting to see where Smith-Schuster is a year from now as he might once again be allowed to test unrestricted free agency after the 2021 season is over with as the final four years of his current contract are set to void five days after the Super Bowl is played. Should Smith-Schuster sign elsewhere a little less than a year from now, you can bet the recent comments he made to Lefkoe will quickly resurface.