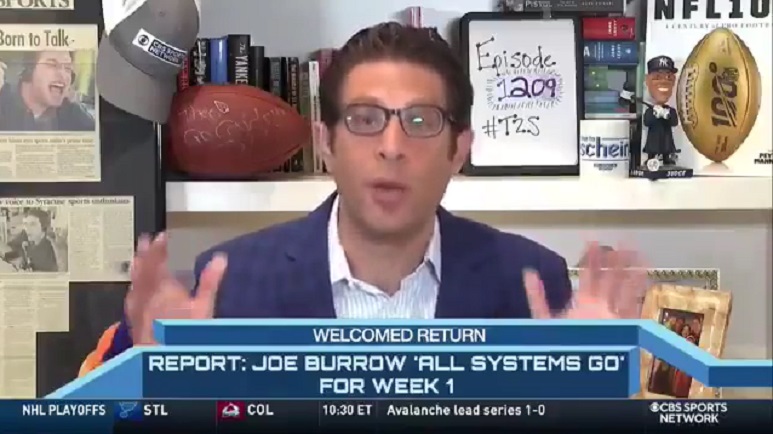 Adam Schein of CBS Sports sure has a long track record of betting against the Pittsburgh Steelers. If you aren’t aware of what that comment means, then you probably haven’t listened to Schein much over the years, Trust me, its documented. In a recent take of his, Schein went as far as to say that he really believes that the Cincinnati Bengals will finish ahead of the Steelers in 2021 and that their quarterback, Joe Burrow, is already better than Pittsburgh veteran quarterback Ben Roethlisberger.

“Let me tell you something. I can’t wait to see what Joe Burrow’s going to do in a full season,” Schein said. “I think Joe Burrow is gonna be an absolute star. Love that they drafted his LSU teammate, Ja’Marr Chase. They were incredible together at LSU. I think Chase is gonna be a rock star. Burrow’s gonna be amazing. They have other big-time weapons at receiver. Mixon running the football. And I’m telling you right now: The Bengals are going to surprise some people. They can beat Minnesota (Week 1). They can beat Jacksonville (Week 4). They could beat Chicago depending on the quarterback situation for the Bears (Week 2). (We’ll) see who the quarterback is in Green Bay (Week 5). They could certainly beat the Lions (Week 6) and beat the Jets (Week 8) to start the season.”

Schein went on to brag a little bit more about Burrow and how he sees the Bengals winning more games than the Steelers in 2021.

“And I’m gonna say it again: Cincinnati can win more games than the Pittsburgh Steelers because they have a better quarterback,” Schein said. “This is great news for the Cincinnati Bengals and for the NFL.”

While Burrow did have his moments as a rookie in 2020, he also failed to make it through the entire season as he tore his ACL in the Bengals Week 11 game.

Flashes during his rookie season and all, Burrow was still 2-7-1 in the 10 games he started. Additionally, while he did throw 13 touchdown passes versus just five interceptions in his 404 total rookie season pass attempts, he was sacked a whopping 32 times. His 5.72 adjusted net yards per passing attempt stat in 2020 leaves a lot to be desired when it comes to 2021 and his second NFL season.

Schein obviously isn’t the only national media analyst to think that Roethlisberger might just now be the worst quarterback in the AFC North. Until Burrow starts proving that he’s definitely better than the Steelers’ veteran on the field in 2021, the fact of the matter is that he’s last in the meantime.