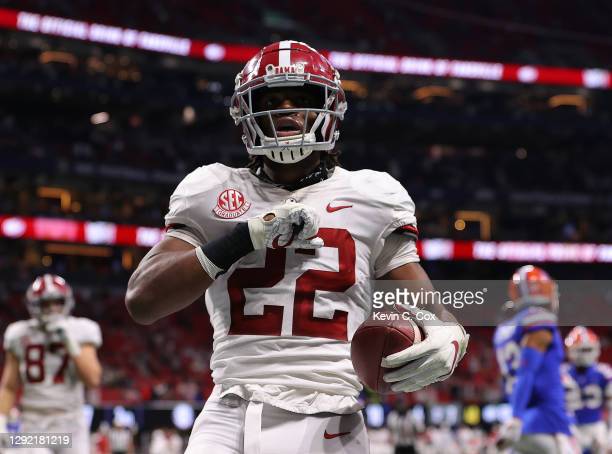 With the 24th overall pick in the 2021 NFL Draft, the Pittsburgh Steelers selected Alabama running back Najee Harris. Harris and the Steelers’ other eight picks could be packaged up into one quick, overall grade. But why not take a detailed look at each individual pick from a number of different viewpoints, before determining a final grade for the player, and later on the entire class?

This is the easiest grade to give here. Harris steps in as the Steelers’ most talented franchise back since Le’Veon Bell in his prime. As big a believer as I am in Anthony McFarland and what OC Matt Canada can do with him, he is not ready to be an every-down back. Neither is Benny Snell, and James Conner is now in Arizona. Even with more needs than a normal draft, a true primary running back was one of the main things Pittsburgh had to find in this draft class.

If you were going to fire up Madden and create a running back specifically to deploy in the Steelers’ offense, Najee Harris would be the end product. As a runner who can play with power, athleticism, and be an asset in the receiving game, Harris fits what Pittsburgh has thrived on utilizing at the position in the Roethlisberger era. Factor in his mindset, attitude, and early signs that he is an admirable person off the field, and Harris is an outstanding all-around fit for the franchise.

The only thing that drops this from a plus to a minus is a couple of the names I mentioned in the first factor. Harris SHOULD step in and be the every-down running back, only leaving the field when he needs a breather. Both as a runner and receiver, he is the top back on the roster. When you invest your first round pick in an RB, you don’t do so to let him spend reps on the sideline.

But Pittsburgh has gotten too used to playing several running backs for me to not envision others stealing snaps that should go to Harris. I don’t see McFarland disappearing with former college coach Canada running the offense (and he has legit upside). Benny Snell will still see the field if he makes the roster. And the team has a thing for Jaylen Samuels. I don’t see any way Harris doesn’t get the lion’s share of the touches, but there will be some plays he isn’t on the field where people will be expecting him to be.

Harris isn’t just a temporary fix. For the next four years (and a fifth-year option), Harris is the expected leading rusher for the Pittsburgh Steelers, and a focal point of the offense. Over that term, he is line to make among the greatest contributions to the franchise. After that, it gets murkier.

Not since Jerome Bettis have the Steelers had a running back start beyond five consecutive seasons. Second contracts with the teams who drafted them are rare among NFL RBs. They are reserved only for players deemed elite enough to eat a large chunk of cap space — Derrick Henry, Christian McCaffrey, etc. Pittsburgh previously tried to make Le’Veon part of that group. Depending on his development moving forward, the team’s cap situation at the time, and the dollar figure, it can’t be ruled out the Steelers put a second contract offer in front of Najee.

It had to come up at some point: The “running backs in the first round” debate. I am firmly of the stance of waiting until Day 2, given the starting value that is always there, and was again in 2021. Unless a player of an exceedingly rare talent level — the latest example Saquan Barkley — falls to the late half of the first, teams should be reticent to spend that kind of capital at the position, when starters at other positions are available, but won’t be by a team’s next draft slot in Round 2. Because of that mindset, this pick is a reach when I grade it.

Working in Harris’ favor is his status as my best back in the class, and by a decent margin. If a team is going to break from the trend and spend a Day 1 pick on an RB, they’d better hit a home run with it. My thoughts shared on Twitter from that night still best summarize my mindset, and why this grade received a little bump up.

I don’t like spending a first round pick on a RB. But if you’re going to, get a superstar and perfect fit for your team. Najee Harris is that, and will be a face of the franchise, star, and perfect Steeler.

No question among running backs, Pittsburgh made the best choice. Travis Etienne didn’t fit the offense nearly as well. Javonte Williams is neither the athlete Harris is, nor worth considering on Day 1.

There were candidates at other positions of need to consider. Primary among them is Oklahoma State tackle Teven Jenkins. Jenkins was a player Pittsburgh was strongly linked to, and a long-term and considerable upgrade over Chukwuma Okorafor. But his fit as an LT compared to RT is of concern. Staying along the line, Landon Dickerson’s injury concerns knocked him off my Round 1 board, and no other lineman deserved the 24th overall pick.

Cornerback was a definite need. But with Joe Haden and Cameron Sutton locked in as starters, teams already took all the names absolutely worth this pick. There weren’t many options of comparable value to Harris at this pick. Jenkins is the lone major notable one, but was definitely one to consider given his status as the first-round talent tackle in the class, and the easier chance of finding a starting RB on Day 2 than a tackle.

I don’t agree with drafting a running back on Day 1. But if any running back was worth it in 2021, it was Najee Harris. He is one of the safest prospects in the class, and one who I think was destined for stardom no matter what team selected him.

Landing in Pittsburgh is one of his best fits, and he fits exactly what the Steelers needed in their offense. Pittsburgh is getting a likely four-year starter at the least, at a major position of weakness. With proven success, potentially Harris is even more, and becomes the rare back worth a lucrative second contract, and the best RB for the franchise since “The Bus” was in service in the early 2000s.

It’s too early to anoint him any of that. For now, Harris is the draft’s top RB, and Pittsburgh filled a major weakness for the next few seasons to come. With the limited options remaining at the time, this is one of the few cases where you can examine a team’s choice of an RB in the first and say, “Eh, maybe they were right to go for it.”