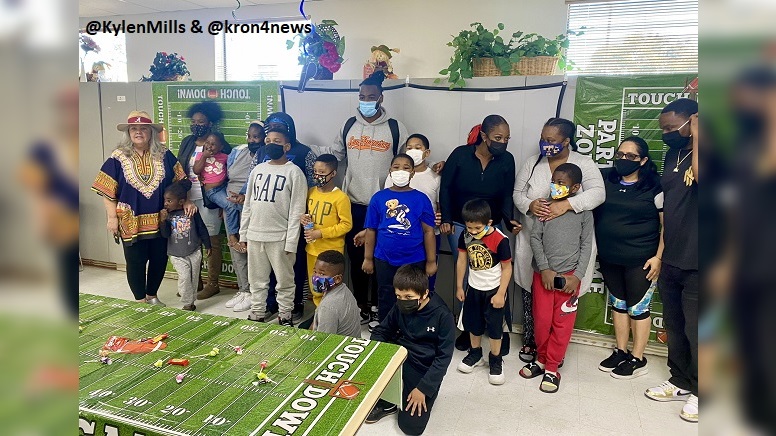 Former Alabama running back Najee Harris, drafted 24th overall by the Pittsburgh Steelers in the first round of the 2021 NFL Draft Thursday night, was not in Cleveland to be part of the festivities. Instead, Harris was in Richmond, CA and for the first part of draft day at a homeless shelter, the one his family once lived in when he was much younger.

As it ended up, Harris actually showed up late to his own family draft party later Thursday because needed to let the people in the Greater Richmond Interfaith Program shelter know that they have his support, even on one of the biggest days of his life.

“I wanted to make sure that I could give back to the community and show them if y’all still need anything, like I’m never too big or too whatever to help you guys out,” Harris said Thursday night after being selected by the Steelers. “I’m always going to be the helping hand.”

Even after getting drafted by the Steelers, Harris wanted those people back in California to know he would still be helping them.

“I’ve got my marketing team, my agency is out here, and since I’ll be in Pittsburgh they’ll be back here,” Harris said. “If they need any support, they can reach out to them if I’m busy and eventually it’ll get back to me.”

Harris was 12 years old when he and his four siblings and parents spent time at that shelter.

“That was important,” Harris said Thursday night.  “Us as a family, we went through a lot of stuff. That was actually one of the places I stayed at, in the homeless shelter. I just want to make sure they know that if they need a helping hand. I’m always here.”

Harris handed out pizzas and other food Thursday night, but his own presence at the shelter provided a lot of hope for people and likely meant more to them than anything else. He indicated that he wants to do the same in the Pittsburgh community.

“In Pittsburgh, I have never lived there, I’ve never been over there before,” Harris said. “All I know is about the football. I’m always hoping to learn new things. I want to see what ways I can help in the community and ways and stuff like that, having food banks, just doing stuff in the area where I can just help out people off-the-field wise stuff, too. Just really stuff like that, giving back to the community.”

Based on what Harris said Thursday night and his actions and generosity off the field that’s been documented while he was at Alabama, Harris should fit in really well in Pittsburgh and with the Steelers organization.

Whatever team drafts Alabama's Najee Harris is getting a special person. Today he threw a draft party for kids at the homeless shelter where he lived for several years growing up. He told me it was emotional the first time he went back to visit. @kron4news #NFLDraft #RollTide pic.twitter.com/JadBIFh4pd