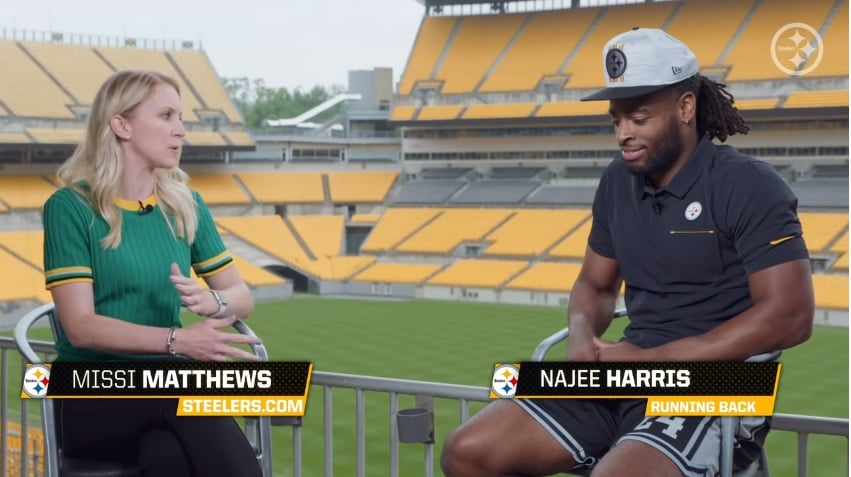 Najee Harris has spent his month since Pittsburgh drafted him getting to know a lot of people. Not just everyone he will be working with within the Steelers organization, but the overall city and community of Pittsburgh. It’s a process that has helped him quickly become a part of his new franchise on the field, and a fan favorite off of it.

In an interview Tuesday with Missi Matthews for the team’s website, Harris went over what’s it been like getting to know some of the people he’ll be working with on the Steelers. One of those people is running backs coach Eddie Faulkner, who Harris shared an entire field with by themselves at rookie minicamp this month.

Among his fellow active players on the roster, one in particular stood out. Harris finally got to share the field with him on Tuesday during the first day of OTAs.

“With Ben obviously, he was out there for a couple days last week. We did eat with him at his house so we had time to bond there, but on the field-wise, I finally get to take some leadership for him and stuff like that. It’s good to finally just really get to know everybody and get to break bread with everybody.”

Harris and Steelers’ quarterback Ben Roethlisberger have already begun to develop a connection in just a short time together on the field at OTAs, catching the attention of many on this deep completion at practice Tuesday.

It’s an opportunity Harris is eager to have, playing with a potential Hall of Fame he grew up watching.

“I was like six probably when he was playing. So for me to actually line up next to him and stuff like that, you know, it is like a huge deal, especially because I used to watch him especially when the Cardinals played the Steelers [in Super Bowl 43],” Harris said. “I don’t want to get too fanboy, I just like taking leadership from him to see like how he prepares for upcoming games, how he prepares for practice.”

Other players Harris has gotten to know better in the last month through minicamp and OTAs are his eight fellow draft picks.

“It’s good to finally meet some of these guys in the rookie class, and it’s really kind of built a bond with each other,” Harris told Matthews.

Harris and his fellow 2021 picks are connected on the roster, but Harris will form key relationships with three in particular. Those are Kendrick Green, picked in the third and fighting to start at center, and Dan Moore Jr., picked in the fourth and fighting for time at tackle. They and second-round tight end Pat Freiermuth, drafted in part because of his blocking ability, will be responsible for learning lanes for Harris as a rookie and moving forward in their respective careers.

Harris, Roethlisberger, Green, Moore, and Freiermuth all have to get to know someone else this year: Matt Canada. Not as a completely new person — Canada was the team’s QB coach last season. But in a new role, after the Steelers promoted Canada to offensive coordinator this offseason. OTAs are a big chance for the team to begin implementing a new offense under the first-time OC.

“From my point, I’m going to believe in him and whatever he calls. If he calls my name, I’m going to obviously try to do the best I can to make the most out of the plays and provide for the team,” Harris said.