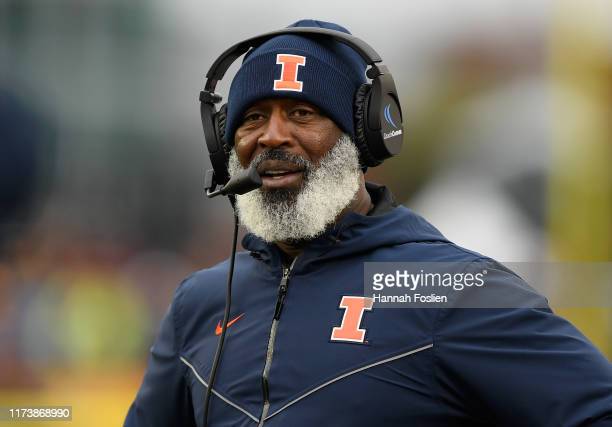 Not every draft pick can say they’ve been coached by someone who did it in the NFL for a long time. But third round pick Kendrick Green can. His Illinois head coach was Lovie Smith, longtime HC of the Chicago Bears. So Green already has an idea of what to expect from NFL coaches.

He joined The End Zone on Sirius XM Radio to talk about his experience playing under Smith.

“Coach always preached to us if you want to be a professional, you’ve got to work like a professional,” Green told the show. “And I used to sit and think on that. It didn’t always have to be doing physical stuff where you’re getting extra work in. Taking care of your body, knocking out some film, Coach always preaches the little things. I think that’s what got me here so far.”

From 1996 to 2015, Smith coached in the NFL. He broke into the league with the Tampa Bay Buccaneers in 1996, serving as their linebackers coach until 2000 and coaching the great Derrick Brooks. Smith moved on to become defensive coordinator for three seasons before the Bears hired him as their head coach in 2004. He was in that position until 2013, won Coach of the Year, and led the Bears to a Super Bowl. He then returned to Tampa to serve as their head coach for three more seasons. Illinois named him their next head coach in 2020. Smith is now an assistant with the Houston Texans.

Smith and Mike Tomlin both descend from the Tony Dungy family tree. You have to wonder if Tomlin placed a phone call to Smith in the pre-draft process to gain some inside info, though Smith had his own self-interest back in the NFL. Regardless, a guy like Green received coaching from someone with over 20 years of NFL experience. And that can only help his transition to Pittsburgh.

Green isn’t the only member of this draft class to benefit from such coaching. Nick Saban, who had a brief stint in the NFL years ago, coached first round pick Najee Harris. Across the board, with the team staying in the Power 5, its draft picks were well-coached by names like James Franklin of Penn State, Kevin Sumlin of Texas A&M, and Paul Chryst at Wisconsin. Fifth round pick Isaiahh Loudermilk’s defensive coordinator is Jim Leonard, who will probably have a NFL job someday. His position coach was Inoke Breckterfield, who coached Aaron Donald at Pitt.