With more time this offseason, I wanted to dive deeper into some questions that I usually don’t have time for. One of these questions revolved around quarterback success. Two answers came to mind that were at the top of my list: Scoring and completing passes, sounds simple enough! Here is a quick explanation of the data points I charted: EPA/Play = (expected points added) expected points after play – expected points before, and CPOE= (completion percentage over expectation) probability for a complete pass compared to similar situations.

The key word for this study is simple. I’m sure some of you agree that stacking too many stats initially can sway the evaluation/opinion. Another goal with this study was not what the quarterback can do, but what did they do with the attributes that every quarterback requires (ex. not every quarterback is a rushing threat, but everyone is expected to add points for your team to win, and complete passes). With that in mind, let’s see what 2020 looked like: 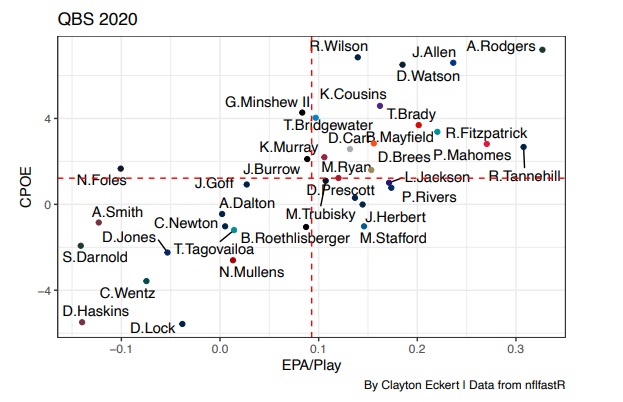 Many things look normal, such as names in the top right (high EPA/play and CPOE) or the bottom left (low EPA/play and CPOE). There are also interesting nuggets such as Deshaun Watson being the 2020 passing yards leader, but Josh Allen (fifth in passing yards) and Aaron Rodgers (seventh in passing yards) provided more team value with their play. Russell Wilson also confirms he completes improbable throws with the elite, but it didn’t always lead to points comparatively.

I also found the middle of the chart interesting, for example Teddy Bridgewater’s CPOE was a bit higher than I expected, higher than Ryan Tannehill for example (even though he graded out higher overall in my study). We already knew the Steelers’ offense left us wanting more, but I’m feeling more encouraged than most. With all the investments on offense in the draft, along with expected improvements from veteran players and an improved run game, Ben Roethlisberger should be higher on this list in 2021. My main takeaway is quality over quantity. Big Ben of course had the quantity of throws in 2020, but I’m hoping and expecting more quality than quantity in 2021.

Let’s take a look from this angle for a moment, who did the best with the most yards:

Lots of interesting stuff here. In a “pass happy league”, quality helped me put into context the best in 2020 at the key quarterback traits. The passing yards table above left me with more questions than answers before I added the ranks.

Now, back to the original question: What are the most important QB traits? Scoring points and completing passes. I know there are many other things to factor in, but that is for another study.

Taking the above information, I think this is another fun way to look at it, quarterback rankings by 2020 EPA/CPOE/Yards (descending):

This is definitely not a black and white quarterback rankings post, but I hope it was a new and fun way to evaluate and think about players. I especially enjoyed the complete removal of personal/media opinion to learn more about the players. If you enjoyed this study, or perhaps would like a QB Study 2.0 with all 36 QBs I charted, email me at [email protected]