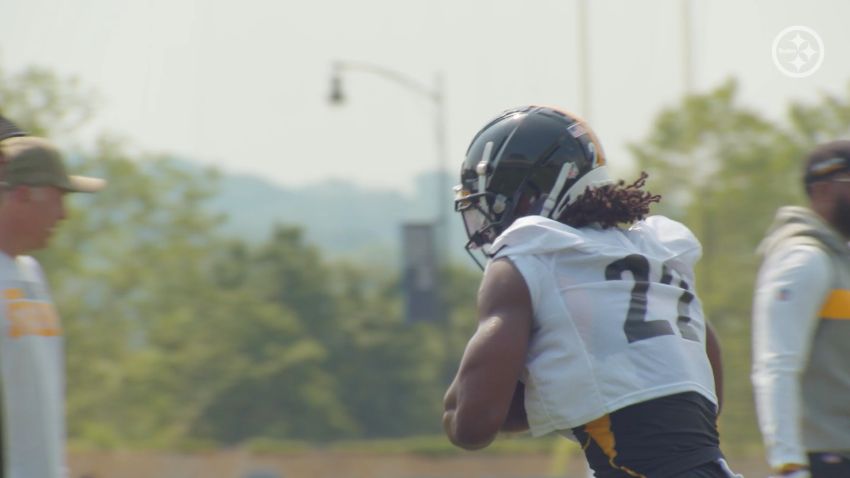 It was a foregone conclusion the second that they used their first-round draft pick on him that Najee Harris would be the starting running back for the Pittsburgh Steelers the second he steps on the field. It remains to be seen if Dan Moore, Jr. will be blocking for him in a game any time soon, but he’s just grateful they’re on the same side now.

Rivals in the SEC during their college careers, Moore, the former left tackle for Texas A&M, recalls watching Harris and his Crimson Tide put them to shame, and that was his first thought when asked about having him as a teammate.

“First of all, I played against him, so I would definitely say I’d much rather have him on my team than him being on the opposing team”, he told Missi Matthews in a recent interview on the team’s website.

Harris will take over for James Conner, who has been the Steelers’ starting running back for the past three seasons, and earned a Pro Bowl nod in 2018. He departed in free agency after the team showed no indications of bringing him back, signing with the Arizona Cardinals, Pittsburgh’s depth chart now fleshed out by Benny Snell, Anthony McFarland, Jaylen Samuels, and free agent signing Kalen Ballage, among others.

Conner did fare well when he was on the field last season, all things considered, rushing for 721 yards on 169 attempts with six touchdowns. He also added another 215 yards on receptions. But the Steelers’ running game as a whole left much to be desired, finishing last in yardage and yards per carry, and 27th in rushing touchdowns.

They expect Harris to be a key answer to the questions they face in the run game, but are also counting on changes along the offensive line and among the coaching staff, as well. Moore will compete with Zach Banner and Chukwuma Okorafor for one of the starting tackle positions, while rookie third-round pick Kendrick Green will battle with B.J. Finney and J.C. Hassenauer at center as Kevin Dotson steps in at left guard.

All of them will be coached by Adrian Klemm this year, who was promoted to offensive line coach from assistant, and Matt Canada—hired in 2020 as quarterbacks coach—will now be running the plays. Can all of these changes yield the sort of improved results on the ground that the Steelers need to be contenders this year? Few are optimistic of that, but there’s a reason they play the games.