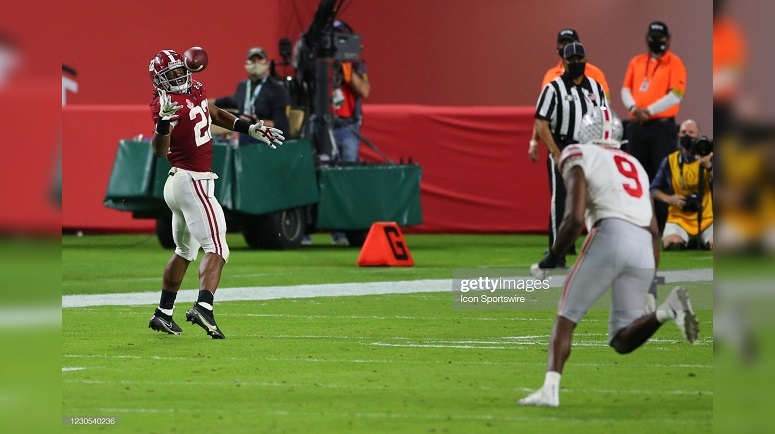 By now, most fans of the Pittsburgh Steelers should know quite a bit about new running back Najee Harris, the team’s first round draft pick this year out of Alabama. Not only was Harris a great ball carrier during his career, but he also developed into an accomplished pass catcher as well, evidenced by him catching 80 passes for 781 yards and 11 touchdowns in his four college seasons. Last season, Harris caught 43 passes for 425 yards and four touchdowns on 53 total targets. That’s a great sample size to contextualize on this late May Sunday.

As noted, Harris was targeted a total of 53 times in 2020. Of the 10 throws not completed to him, most were off the mark. He didn’t have any drops, per my deep dive into his total targets. That’s the first plus to note.

On all 53 targets in 2020, Harris registered an average depth of target stat of just .283 yards. With him being a running back, that’s not overly surprising. After all, he had a lot of quick screen passes to him both by design and checkdowns. In short, that stat really isn’t worth going over too much other than noting once again that he wasn’t thrown to down the field too terribly much.

On his 43 total receptions in 2020, Harris had a first contact average yardage stat of 5.16 yards past the line of scrimmage. That is also quite impressive. He also averaged nearly a broken tackle a catch at .907 per reception.

Pro Football Focus has Harris down for a 9.7 yards after catch number in 2020. That’s right at where I have the Alabama product through his regular season play. As you can see, Harris finished second to only Clemson running back Travis Etienne in 2020 in that stat. Etienne caught 48 passes for 588 yards.

Most yards after catch per reception in CFB last season (RBs, min. 35+ receptions)