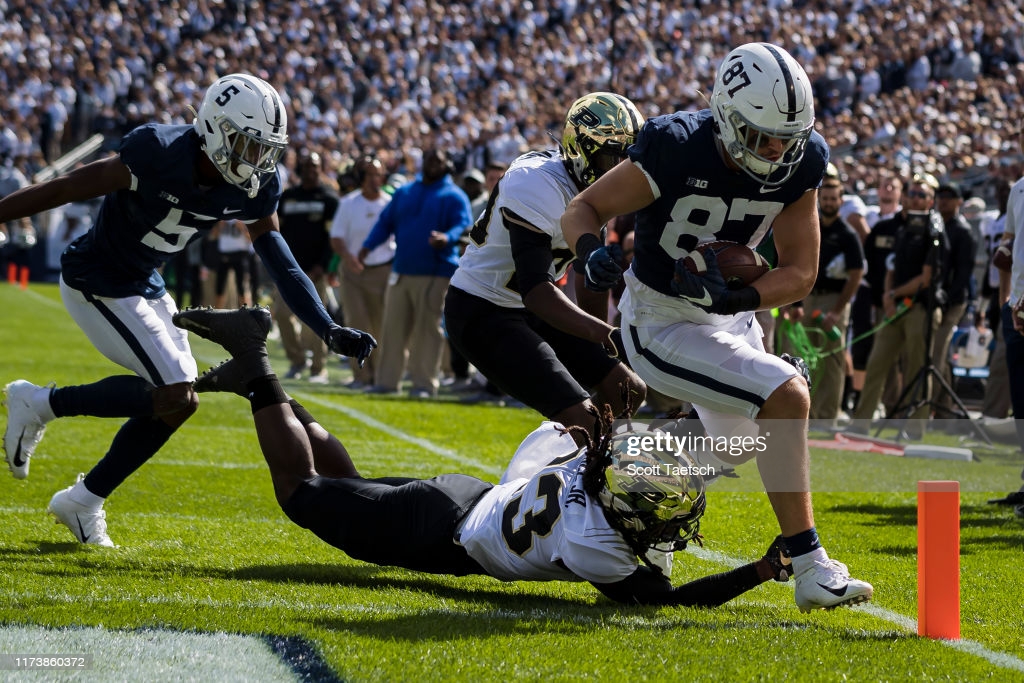 Day 1 of the 2021 NFL Draft is in the books. We’re still talking and breaking down the pick of Alabama RB Najee Harris, but you know we can’t help but have an eye towards Day 2 kicking off in just a couple hours. As always, here’s a couple of players worth keeping an eye on as we move through Rounds 2 and 3.

Pat Freiermuth/TE Penn State — One of the guys who just feels like a Pittsburgh Steeler. Penn State kid with good size, effort, and a tough dude with a reliable pair of hands. TEs coach Alfredo Roberts seemed infatuated with him and put him through drills at the Nittany Lions’ Pro Day. He’d be the serious investment at tight end the team has been lacking for over a decade. If he makes it to #55, he could be their choice.

Landon Dickerson/C Alabama — Dickerson was not selected in Round 1 despite having first-round tape and seemingly high character. Medical is the obvious red flag here and it’s impossible to gauge how far he could fall. Could be taken in Round 2; after all, no centers were taken in the Top 32. Or he could slip into Day 3. But his physicality and size are what the team desires, and the pre-draft reports indicated the Steelers were definitely interested.

Quinn Meinerz/C Wisconsin-Whitewater — Going small-school would buck a pretty heavy trend, but Meinerz is as nasty and as athletic as any interior linemen in this draft class. Offensive line coach Adrian Klemm attended his Pro Day after Meinerz came out of nowhere to dominate the Senior Bowl. His performance in Mobile may have made the Steelers comfortable enough projecting him to the NFL, especially after Meinerz wasn’t able to play in 2020 due to the pandemic. He certainly will need time to adjust in the NFL, but the payoff here could be huge.

Anthony Schwartz/WR Auburn — Think I speak for both of us when I say Dave Bryan nor myself would love this pick. But we shouldn’t discount it. The Steelers love having speed in this offense and few in this class are faster than the track star Schwartz, who blazed a 4.27 at his Pro Day. The problem is there isn’t much else in his game to get excited about. But you can’t teach speed. He may be an option at #87.

Kyle Trask/QB Florida — Another selection I wouldn’t be thrilled with. Mason Rudolph’s one-year extension diminishes the odds of them taking a quarterback in the middle rounds. And let’s hope so. But there’s been plenty of smoke surrounding Trask, who profiles similarly to Rudolph. My guess is Trask isn’t selected, but you never know.

Jalen Mayfield/OT Michigan — Several tackles we could list here (Texas’ Samuel Cosmi, Northern Iowa’s Spencer Brown, Notre Dame’s Liam Eichenberg) but I’ll put Mayfield. He’s only 20 and lacks experience, but is a nasty run blocker. The Steelers love themselves some Michigan men. His poor Pro Day workout pushes him down the charts some, but possibly into the Steelers’ lap.

Baron Browning/LB Ohio State — A favorite of Dave Bryan, Browning is an athletic, off-ball linebacker with experience on the edge and at inside linebacker. HIs production in school was light being surrounded by so many other LBs, several of which will get drafted this year, but there’s serious upside here.

Derrick Barnes/LB Purdue — Similar story to Browning. Barnes isn’t quite as explosive, but he’s a heavy hitter with better production both on the EDGE and at off-ball linebacker. ILBs Coach Jerry Olsavsky attended his Pro Day and put him through drills. A riser in the process, he could be an option at 87. I won’t even 100% discount him being the guy at 55.

Ronnie Perkins/EDGE Oklahoma — Perkins doesn’t have the bulk the team typically looks for in the position, but he shows good bend and hand use to stay clean as a pass rusher. He’s versatile, played on his feet, and shows a more effective power rush than you might believe just looking at him. Still, he can get washed out against the run. Option at 55 or 87.

Shaun Wade/CB Ohio State — Wade’s stock dropped in 2020 for two reasons. One, he moved to outside corner after playing in the slot throughout his career. Two, he battled a turf toe injury. That led to some really ugly moments. But he’s a favorite of Scott Pavelle and after Wade posted good numbers at his Pro Day, including a 4.46 40, his stock may have saved a little face. Perfect fit in the slot for the Steelers. Could be the guy at 87.

Robert Rochell/CB Central Arkansas — Another small-school player, but unlike so many others, Rochell played football in 2020. Decent size and an excellent athlete, College Scouting Director Phil Kreidler attended Rochell’s Pro Day. We billed him as a sleeper back in mid-March. On tape, he’s an impact player and uses his length well, but was an inconsistent corner who needs to show better eye discipline.