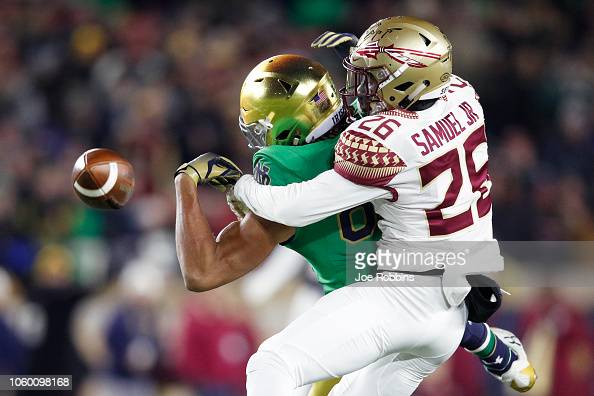 Are you ready for yet another mock draft from Pro Football Focus, who must have churned out a dozen by now from a wide variety of writers? Because if you are, then sit down and enjoy, because we have a significant one today from one of their head writers, Steve Palazzolo.

It’s worth noting that Palazzolo takes a different approach from how many others might orchestrate their mocks. He simulates what he would do if he were the general manager of these teams, rather than trying to divine what he believes the team might be thinking with regards to their draft plans.

The Steelers have a few major needs to fill, and starting cornerback opposite Joe Haden is right at the top of the list along with offensive tackle and center.

Samuel is a ballhawk, especially with his eyes on the quarterback, and that’s a perfect fit for the Steelers defense. He has slot-like movement skills, but he’s at his best in a zone-heavy scheme on the outside. Samuel ranks above average in most PFF critical factors, but it’s his 97th-percentile forced incompletion percentage that is most attractive and the right fit for Pittsburgh.

It’s worth noting that cornerback became a bigger need than anticipated when he did his first mock, since the Steelers released Steven Nelson, one of their starters in the interim, and they also lost four-year starting nickel back Mike Hilton, whom many thought they might be able to keep. They did re-sign Cameron Sutton, who will now enter the starting lineup.

Of course, we also can’t ignore the fact that Joe Haden’s career is winding down. Haden just recently reached his 32nd birthday. While he’s younger than me, I’m not out here trying to play cornerback at the highest level of the sport, either.

Haden has been with the Steelers since 2017, reaching the Pro Bowl as an alternate in 2019. He has started 56 games for the team since Pittsburgh signed him, recording 10 interceptions and 48 passes defensed with 200 tackles and one sack.

Aside from Sutton, the only other cornerbacks on the roster from last season are Justin Layne and James Pierre, neither of whom have much playing experience. Veteran Trevor Williams, who Pittsburgh signed to the practice squad in January, is also on the roster. As is first-year Stephen Denmark, a 6’2”, 217-pound prospect out of the heralded Valdosta State, which has produced four draft picks in its history. Jessie Tuggle, a five-time Pro Bowl linebacker for the Atlanta Falcons, is the school’s most notable NFL alumnus as a former undrafted free agent. So there’s your history lesson for the day.