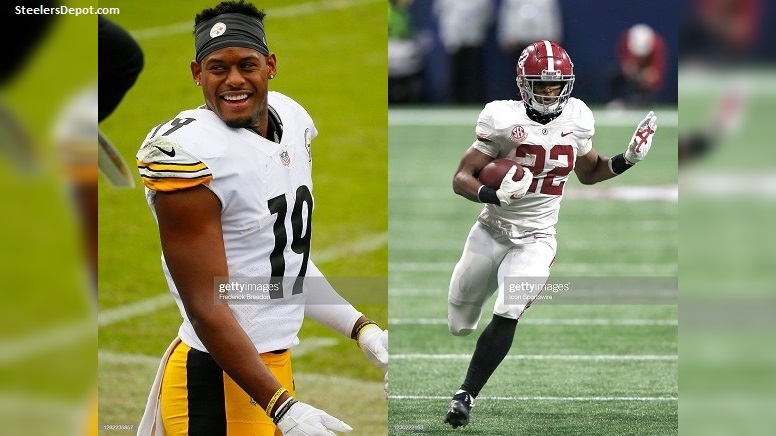 With Pittsburgh Steelers wide receiver JuJu Smith-Schuster now back in the fold for at least the 2021 season, you can probably bet the former second-round draft pick out of USC will be paying close attention to the early rounds of the 2021 NFL Draft to see what and who the team adds via the annual process. While Smith-Schuster doesn’t know for sure which way the Steelers will go in this year’s draft, he knows the team’s history when it comes to how they’ve used their first-round selections for several consecutive seasons.

“Man, Pittsburgh’s known to draft a defensive player in the first round always,” Smith-Schuster recently told former NFL wide receiver Michael Irvin on his podcast. “I think the last one we had was [David] DeCastro on offense. Hopefully we get someone on offense to help us out.”

“Najee Harris, one of the best running backs out there that could fit in our caliber, our team,” Smith-Schuster told Irvin. “And you know, if we had him, it would be cool.”

If the Steelers don’t draft Alabama running back Najee Harris in the first round, Smith-Schuster told Irvin he wouldn’t mind seeing them address the offensive line at 24 overall, especially the center position.

“And also, I think O-linemen, too,” Smith-Schuster said. “I think, you know, with some guys that we don’t have back, you know, coming back with Ben; Maurkice Pouncey, one of the dudes that was Ben’s guy since day one. You know, having the center to be a great fit for us.”

Smith-Schuster did, however, admit to wanting the team to go offense in the first round of this year’s draft because that’s the side of the football he plays on.

Regardless of who the Steelers draft this year, Smith-Schuster said in his interview with Irvin that he believes that the 2021 version of the team will be in good shape come the start of the regular season.

“But as far the team, I think we’re solid, man,” Smith-Schuster told Irvin. “I think we’re going to be good. I think our new OC [Matt Canada], our new play calling is going to be amazing. I think, you know, having the guys that we have back, even me just coming back, some more vet guys on offense would be cool too. So, I’m super excited.”