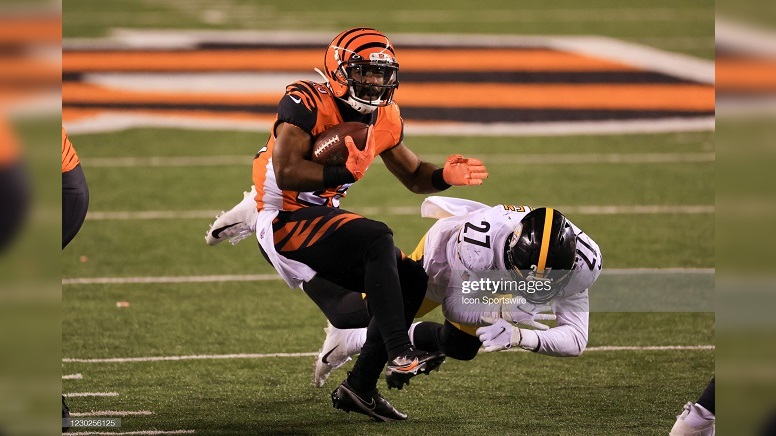 The Cincinnati Bengals cut ties with longtime running back Giovani Bernard Wednesday. Now, the 29-year-old North Carolina product is looking for a new team after playing all eight of his NFL seasons with the franchise that originally selected him in the second round of the 2013 NFL Draft. So, should the Pittsburgh Steelers now look into signing the former Bengals running back? Longtime NFL insider John Clayton thinks they should consider Bernard, saying so during his Wednesday interview on 93.7 The Fan.

“I think so, yeah,” Clayton said after being asked if the Steelers should pursue Bernard now that he is a street free agent. “I mean, because, you know, he’s not the physical back, but he’s a good back and right now you can probably get him for $2 million, $2.5 million at the most. And so, I think you make a move on that. I mean, you know him from the division. He’s still young enough to be effective. And most people did think that he was going to be a cap casualty and sure enough, here he is. So, no, I think that that would be a very solid consideration.”

Most of you probably know that I have long been of fan of Bernard’s, and have believed for some time now that the Bengals never fully used him properly for much of his NFL career. Would I like to see him land with the Steelers even at 29 years of age? Sure, I would. That said, it’s just not feasible at this point from a roster and salary cap standpoint. It’s even less so should the Steelers wind up picking up yet another running back early in this year’s draft.

While I highly doubt the Steelers will sign Bernard, I don’t think he’ll have a problem finding a few suitors just the same. And while he might stay unemployed until after the draft, he’ll find a team eventually, and likely contribute well for them during the 2021 season.

Bernard has appeared in 115 games in his NFL career and has rushed for 3,697 yards and 22 touchdowns. He also has 342 career receptions for 2,867 yards and 11 touchdowns. He can still pass protect pretty well on top of everything else. Here’s to him landing with a team that doesn’t play the Steelers in 2021, but does play the Bengals. It would be fun to see him go against his former team in 2021. Especially with the Bengals waiting so long into the offseason to cut him.