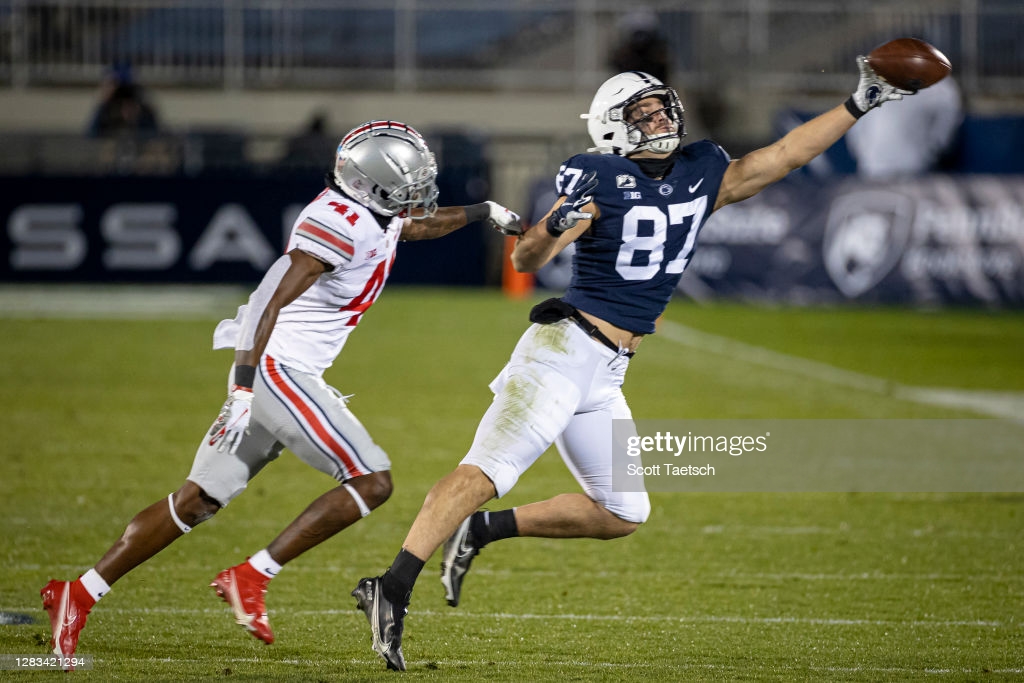 It didn’t take long in the second round (pick 55) for some potential Steelers targets to come off the board. First Landon Dickerson went to Philadelphia. Then four tackles came were selected, including Teven Jenkins and Liam Eichenberg. Then it was the defensive backs, including one of my favorites Richie Grant, and Asante Samuel Jr.

At pick 55, though, there were options including OT Jalen Mayfield, OC Quinn Meinerz, and OC Creed Humphrey to continue improving the run game. There were several ways they could have gone, and the choice was TE Pat Freiermuth from Penn State.

Tight end was a positon of need with the retirement of Vance McDonald. Freiermuth was clearly on the Steelers’ radar. Mike Tomlin, Kevin Colbert and tight end coach Alfredo Roberts all attended the Penn State Pro Day, and also had a Zoom meeting with him.

The NFL Network’s Daniel Jeremiah had him listed as his #46 prospect and commented, “Freiermuth is a big tight end with toughness and strong/reliable hands. In the passing game, he plays inline, on the wing or flexed out. He is a one-speed route runner, but he has a good feel for setting up defenders and using his big body to wall them off when the ball is in the air. He attacks the ball and flashes the ability to make special one-handed grabs. He is physical and fights for extra yards after the catch. He doesn’t offer much top speed or wiggle. He fights to stalemate at the point of attack in the run game, but he will fall off at times. His willingness is apparent. Freiermuth isn’t a dynamic athlete, but he has a good feel for the position and should be a steady, reliable starter.”

Gil Brandt had him listed at #38 in his Hot 100 and had a short but to the point comment, “Freiermuth’s size enables him to be a good blocker — and he also has catching skills.”

Lance Zierlein of NFL.com  had him as his number 3 tight end and gave him a 6.30 grade (Will be starter within first two seasons). He opined, “Big, athletic tight end with the potential to be a combo player at the position, helping as a run blocker and pass catcher. Freiermuth needs to tighten up his technique as a run blocker but his foot quickness and agility led to some splashy recoveries and block finishes that foreshadow his future potential. He’s athletic and has good build-up speed down the seam to attack the second level. However, he’s average in separating underneath. Will need to do a better job of accessing his basketball background and putting a body on defenders to “block out” and create space for the throw. He’ll need to have his season-ending injury vetted, but he has Day 2 talent for teams looking to bolster their 12 personnel package or add production from their Y tight end.”

Wes Cantliffe did our report and summed him up like this, “I think a fit with the Pittsburgh Steelers would make sense as long as they believe in his foundation as a blocker. He seems to check some of the boxes that the Steelers look for when it comes to draft evaluation. He is reported as being a person of high character with and impressive work ethic.” Cantliffe had him as a late first round/early second round selection.

Overall, this is a high value pick based on need, fit and where he generally appeared on draft boards. But you have to question why they didn’t get one of the available centers. There have been some comparisons to Heath Miller, and if he can play to that level in his career, this will be a steal. But that is a lofty and frankly unfair comparison.

In what might be Ben Roethlisberger’s final year, Freiermuth becomes a nice compliment to Eric Ebron and will give the team two receiving options in two-tight end sets, and could be the starting tight end in 2022. This choice definitely improves the tight end group.