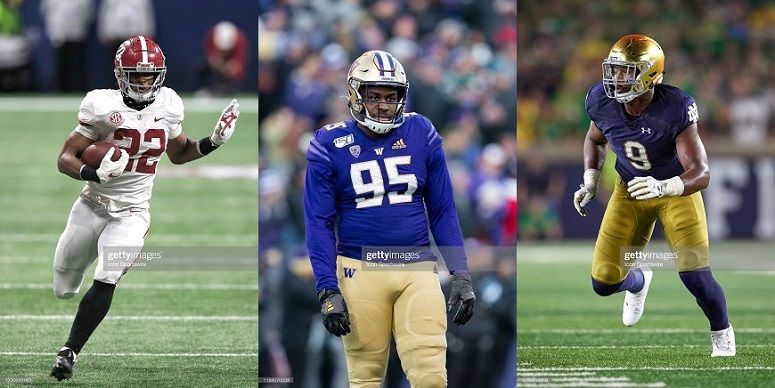 NFL.com draft analyst Chad Reuter recently projected the Pittsburgh Steelers 2021 NFL Draft picks round by round via video format and while he has the team going heavy on their defensive front after first selecting a running back in his latest offering, he made it clear that he doesn’t see the team drafting a quarterback at all this year.

“Of course, the biggest question is whether the team picks a new quarterback to back up Ben Roethlisberger this year and take over the reins in a year or two but the addition of former first round pick Dwayne Haskins to compete with solid backup Mason Rudolph makes me think they’re a year away from pulling the trigger on an early selection at quarterback,” Reuter said in his mock draft video.

Reuter’s video mock draft has the Steelers selecting Alabama running back Najee Harris in the first round at 24 overall and that’s not a huge shock. Harris has been mocked to the Steelers in the first round quite a bit my major media draftniks this offseason and with the team having a heavy and notable presence at the two Alabama pro days these last few weeks, it makes for an easy choice.

After mocking Harris to the Steelers in the first round of his latest video mock, Reuter has the team addressing their defensive front with their next two selections in rounds two and three.

“Pittsburgh usually builds up the front seven early in the draft. So, a second-round selection of defensive tackle Levi Onwuzurike and a third-round pick of edge rusher Daelin Hayes from Notre Dame would meet two critical needs,” Reuter predicted.

Onwuzurike, in case you’re curious, measured in at his pro day at 6027, 290-pounds with 10 1/8-inch hands and 33-inch arms. He ran his 40-yard-dash in under 4.9-seconds and posted a vertical jump of 30-inches and a broad jump of 9’1″. Onwuzurike, who chose to opt out of his 2020 senior season, recorded seven sacks and 95 total tackles in his previous three seasons at Washington. It would be a bit of a surprise to see him selected by the Steelers in the second round.

The Steelers had a heavy presence at the Notre Dame pro day again this year so Hayes could be in play for the team at some point in this year’s draft. He measured in at his pro day at 6034, 253-pounds and posted some nice times and measurements as part of his showing. In his five seasons at Notre Dame, Hayes registered 97 total tackles, nine sacks, one interception and four forced fumbles.

Reuter has the Steelers down as using their two scheduled fourth round selections on offensive linemen and both from Power 5 Conference schools at that.

“The team has two fourth round selections; one as a free agent compensatory pick,” Reuter explains. “I project that both will address the offensive line with Ohio State center Josh Myers taking over for the retired Maurkice Pouncey at center. Florida tackle Stone Forsythe will compete for the left tackle spot.”

Myers would be considered by most reading this post as quite the steal for the Steelers in the fourth round. The Steelers did have general manager Kevin Colbert, head coach Mike Tomlin and new offensive line coach Adrian Klemm present at the Ohio State pro day recently so Myers figures to be in play for the team in this year’s draft at some point and on the heels of veteran center Maurkice Pouncey retiring earlier in the offseason.

As for the rest of his video mock draft, Reuter only gives position predictions and not any named players.

“Pittsburgh does not have a fifth-round pick, but it’s three selections in the sixth and seventh rounds will be used for depth at cornerback safety and linebacker,” Reuter predicts.