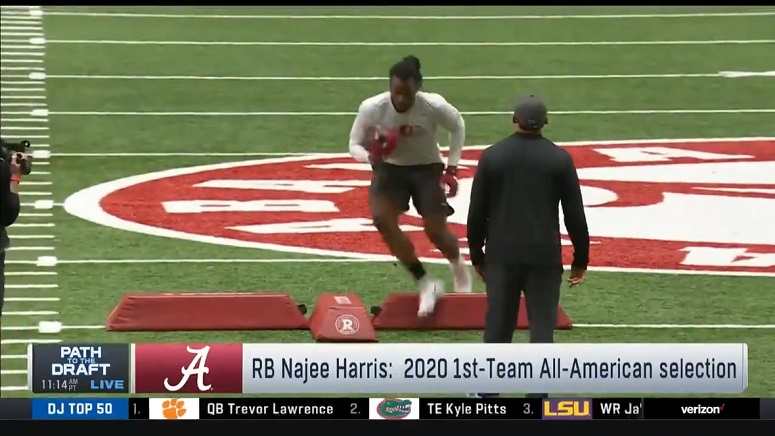 If the Pittsburgh Steelers wind up selecting a running back in the first round of the 2021 NFL Draft, it’s a good bet that it will be Najee Harris out of Alabama. After all, the Steelers want to improve their running game in 2021 and the word most of the offseason has been that they are high on Harris. Harris, as it turns out, seems to be pretty high on the Steelers as well and he said as much during his recent interview on The Adam Schefter Podcast‬.

During his interview with Schefter, Harris talked about one specific Zoom calls he’s had this offseason that impressed him and that he deemed as being the coolest of them all.

“Like, a cool ass Zoom call was for sure, I met them in person and on Zoom, was the Steelers for sure though,” Harris said.

When asked if it was just Steelers head coach Mike Tomlin, Harris let Schefter know that he wasn’t the only one involved in the Zoom call he was referencing.

Harris was then asked specifically about Tomlin.

“He’s really cool,” Harris said. “But, like, so he was just, you know, it’s just the basic questions that they ask you to get to know you. Stuff like that.”

Schefter then proceeded to tell Harris that he could definitely see him being a member of the Steelers.

“It’s not my decision,” Harris said. “And like I said, I’m just waiting to see who I set up shop at. I don’t make the decisions. The only thing I can control is how I practice, how I play, how I train. Listen, you know probably more stuff about me about stuff. I’m clueless right now.”

The Steelers made it to both of the Alabama pro days this year. Tomlin, general manager Kevin Colbert and offensive coordinator Matt Canada attended the first of the two Alabama pro days but that was the one that Harris didn’t do anything at.

The second of the two Alabama pro days included Harris only doing drills and while Tomlin, Colbert and Canada weren’t present for that one, running backs coach Eddie Faulkner, quarterback coach Mike Sullivan and college scouting coordinator Phil Kreidler were. Faulkner, by the way, was even the one who put Harris through his running back drills that day.

It will be interesting to see where Harris ultimately goes in the draft and if he makes down to the Steelers in the first round at 24 overall. If he does, one would think it would be hard for the Steelers to pass him up because they really seem to like him, and he likes them. We’ll find out in less than 30 days from now if Harris will be wearing the black and gold and be coached by Tomlin and the rest of the staff in 2021.