Day-two of the NFL’s 2021 legal tampering is now underway, and it follows us observing the Pittsburgh Steelers re-signing one of their own players on Monday, cornerback Cameron Sutton. With Sutton now back in the fold and no other known moves needing to be accounted for, we can take a quick look at where the Steelers currently sit at salary cap-wise heading into Tuesday morning.

Let’s start first with what the NFLPA shows on Tuesday for the Steelers. They show the Steelers with 57 players under contract for the 2021 season and the team $5,657,086 under the cap. Those numbers, however do not include the contracts of center B.J. Finney and Sutton, so that is especially important to note. That number also does not include the 2021 offseason workout placeholder amount of $792,000, which will also be hitting soon.

Factoring in the recent contracts signed by both Finney and Sutton, the Steelers currently sit $2,447,586 under the salary cap for 2021 as of Tuesday morning. While the Steelers still have ways to go about clearing additional salary cap space, they have yet to do so at the time of this post.

The Steelers are expected to re-sign tackle Zach Banner soon and when and if that happens, his new contract should not move the team’s 2021 salary cap number much. It will also be interesting to see if any other lower-level deals get finalized with a few of the Steelers soon-to-be unrestricted free agents. If those happen, like Banner, they, shouldn’t eat into the available salary cap space terribly much.

Will the Steelers have a contract termination in the next 24 hours? We’ll see. I’ll provide another salary cap update for the Steelers in 24 hours. 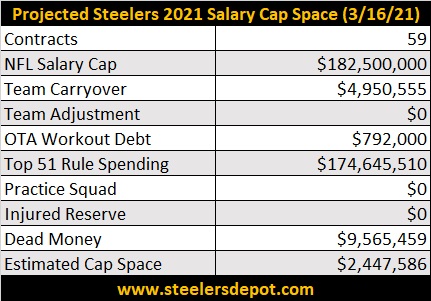