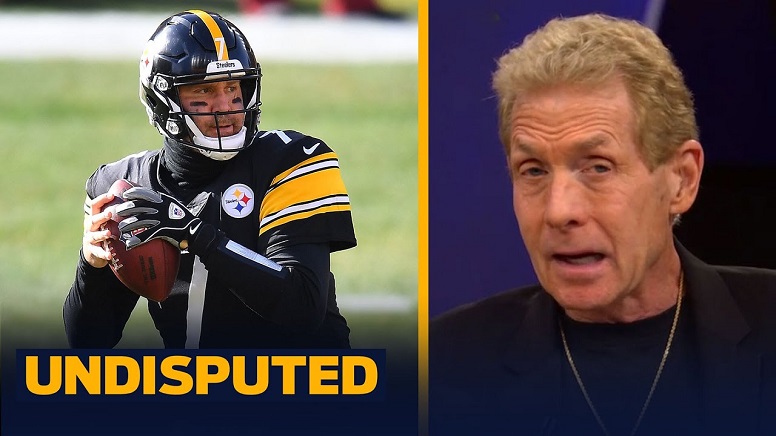 Longtime major media talking head Skip Bayless of Skip and Shannon: Undisputed on Fox Sports 1 is an unabashed fan of the Dallas Cowboys. Along with that, Bayless is an extreme hater of the Pittsburgh Steelers. With those facts reestablished for those that may have forgotten them, Bayless believes the Steelers are doing the right thing in bringing back quarterback Ben Roethlisberger for one more season in 2021.

“I still believe in Ben Roethlisberger,” Bayless told Shannon Sharpe during a Friday television segment. “I’m still a fan of his.”

Bayless knows that for Roethlisberger and the Steelers to be able to return to the playoffs and potentially make a run at the Super Bowl in 2021 that the running game needs to improve drastically. He believes that will happen after the Steelers select a certain Alabama running back in the 2021 NFL Draft.

“The running game is the quarterback’s best friend,” Bayless told Sharpe. “Well, I believe Ben is going to have a new best friend next year named Najee Harris. And if he does, you better look out because it’s going to change the way they play offense. It’s going to change; they’ll tilt back to a balanced team. And if they can, listen, Ben Roethlisberger, I realize he’s 39 years of age and yet he’s been to six Pro Bowls, he’s been to three Super Bowls and he won two of them. And I get, it looked like he couldn’t throw it five yards last year, but he just knows how to play quarterback. He just knows how to stay upright in the pocket. I don’t know how he does it, he’s just a big, strong guy and it’s not weight room strong. And he takes a lot of hits for he’s not the biggest workout warrior in the offseason.”

Bayless also believes that Roethlisberger will be as ready as ever for his 18th NFL season, which is likely to be his last one. He believes he’ll be motivated by seeing Tom Brad win another Super Bowl this past season at the age of 43 and how the sudden realization that his own NFL career is likely in its final season will make a difference.

“But the point is, I believe he will be inspired by what he saw [Tom] Brady do,” Bayless said of Roethlisberger. “And I believe he did at least glimpse his football mortality at the end of that Cleveland [playoff] game, like, is this the end for me? And I believe you’ll see a much more recommitted Big Ben, offseason going into regular season.”

Bayless believes that the return of Roethlisberger in 2021, when combined with the parts of the team’s defense expected back, will keep the Steelers in the thick of the AFC North division this coming season.

“I like their [the Steelers] chances,” Bayless said. “I still think they’re going to rival Baltimore for the best team in that division.”

When pushed by co-host Sharpe to further clarify why he believes the Steelers can win the AFC North in 2021, Bayless did not back down, and he once again circled his reasoning back to Roethlisberger returning for what will likely be his final season.

“I give them a real shot to win the division,” Bayless said of the Steelers. “And I think Cleveland will get a little better. I think Baltimore is going to be really good, I liked them a lot last year. So, it’ll be a three-team race, but I’m not counting Pittsburgh out of winning this division, not with Ben Roethlisberger back at quarterback. And I do believe he will be scared straight. I believe he saw it like his end flash before his eyes and I don’t think it’s ever flashed before.

“I don’t think he’s ever had any pressure on him, and he felt real heat on him for the first time that he just might lose his job. And he took a huge cut in salary. I mean, $14 million is still, it’s good money by most people’s standards in pro football, but not by quarterback standards. He’s only making $14 million. I think that will humble him and refocus him.”

That was quite the unexpected take by Bayless and a quite objective one at that. He’s not guaranteeing that the Steelers will win the Super Bowl in 2021, only that he thinks they have a great shot at winning the AFC North and mainly because Roethlisberger will be back. It will now be interesting to see if Bayless chooses to die on that Roethlisberger hill he’s now firmly planted on the remainder of the offseason.

“Doesn’t he know that this is it,” Bayless said of Roethlisberger to Sharpe. “Like, all of a sudden this could be one and done, one more and done. And doesn’t he know he’s playing for his future now? And I think he doesn’t want to quit yet. And I think you’re going to see a much better Ben next year then you saw last year and yet last year they got to 11-0. Ain’t easy.”