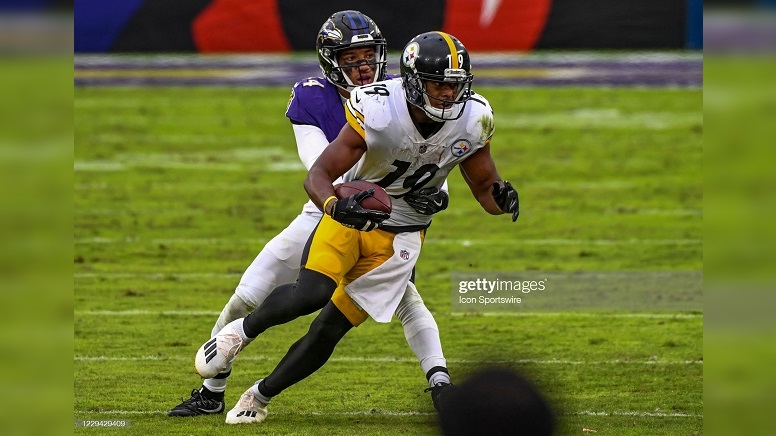 Friday, we found out that wide receiver JuJu Smith-Schuster will remain with the Pittsburgh Steelers for at least one more season. We also found out on Friday that Smith-Schuster probably came really close to becoming a member of the Baltimore Ravens for 2021.

The Ravens reportedly went all out in attempting to recruit Smith-Schuster these last several days to start the new league year and the Steelers wide receiver revealed as much on Twitter Friday via a response to Baltimore cornerback Marlon Humphrey.

My bad bro 🤣 had your teammates and coaches calling throughout. I appreciate you guys. Respect you and the org a lot. Best of luck this offseason and see you this yr ✊🏾 https://t.co/t4qiFEqD6i

According to Jason La Canfora of CBS Sports, Ravens quarterback Lamar Jackson also did his best to recruit Smith-Schuster to Baltimore as well.

According to several Friday morning reports, the Ravens offered Smith-Schuster up to $13 million for 2021 to sign with them. $4 million or so of that he reportedly could have earned via incentives, however. The Steelers are reportedly going to pay Smith-Schuster just $8 million for 2021 and with four extra years tacked on as voidable ones to keep his cap charge low this season.

Sources tell me these were the other offers

Ravens offer to JuJo was for $9.5M plus 3.5m incentives. Steelers deal is $8M for 1 year, no incentives. Lamar Jackson was recruiting JuJu I'm told. He opted to stay

Could you imagine if Smith-Schuster had taken the Ravens offer? Seeing him in a Ravens uniform twice in 2021 would have been a tough chore for sure. I would imagine there would be a lot of Smith-Schuster Steelers jerseys burnt to a crisp by now as well.

In the end, all is well that ends well. Smith-Schuster shunned the Ravens to stay with the Steelers and he left money on the table in Baltimore to do just that. I bet Humphrey can’t wait now to face Smith-Schuster in 2021 and remind him about him not returning his offseason direct message recruitment attempt.