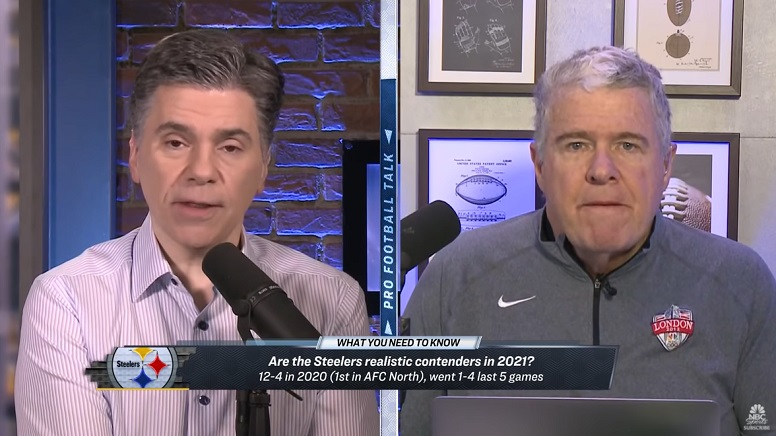 What will the Pittsburgh Steelers ultimately look like in 2021 and will this year’s team have any sort of real chance at competing for the Super Bowl? That’s a hard question to really answer at this point ahead of free agency and the draft taking place. Even so, most analysts I read and hear seem to believe that at best, the Steelers will make the playoffs as a Wild Card but fail to win the Super Bowl. On that note, Longtime NFL analyst Peter King was on Pro Football Talk on NBC Sports with Mike Florio a few days ago and during a segment he was asked if thinks the 2021 Steelers team has the potential, given the other competitors in the AFC, to get to the Super Bowl this upcoming season.

“I mean, the potential, I’ll tell you this, Mike, if you line up 12 to 15 teams before every year as teams that have the potential to get to the Super Bowl, I’ll take Pittsburgh because they’ve got [Ben] Roethlisberger and even without Bud Dupree, they have a championship defense,” King said. “They can win a championship with that defense.”

The Steelers will indeed be without the services of outside linebacker Bud Dupree as the former first-round draft pick out of Kentucky is expected to sign with another team during free agency. this offseason Assuming that’s what happens, second year outside linebacker Alex Highsmith, drafted last year by the Steelers in the third round out of Charlotte, will be asked to take over Dupree’s right outside linebacker spot. While those are some big shoes to fill, Highsmith did show solid growth in his play as rookie in 2020. With that’ he’ll be expected to make another jump in his second NFL season.

In addition to likely losing Dupree this offseason, the Steelers are almost guaranteed to also lose another key cog of their defense in free agency, slot cornerback Mike Hilton. If that’s not enough, another soon-to be unrestricted free agent cornerback, Cameron Sutton, is not yet guaranteed to be re-signed. If he is re-signed, that would certainly help alleviate the loss of Hilton.

While King initially threw out there that he’s not totally discounting that the Steelers can make it to the Super Bowl this upcoming season, he went on to start backpedaling in the rest of his answer. King said first that he believes the Steelers will essentially have their hands full in the AFC North division in 2021 and boy did he go out on a limb there.

So, where does King think the Steelers will finish in the AFC North in 2021 and does he really believe deep down inside that they can make it to Super Bowl? His last part of his answer to Florio included one heck of a waffle.

“In my opinion right now, Mike, I’m not saying that that the Steelers can’t win the division, but I also think they could finish fourth,” King said. “I don’t think they will finish fourth, but I think they could. A year ago at this time, even after, well, 11 months ago at this time, there weren’t many people saying the Tampa Bay Buccaneers could win the Super Bowl. So, I don’t really know how to answer that question other than if everything goes right, and it did in the first 11 weeks of the season last year, the Pittsburgh Steelers could be a Super Bowl team. But I do think they’re getting passed on the left by quite a few teams in the NFL.”

What kind of analysis is all that? King basically said maybe the Steelers can make it to the Super Bowl in 2021 and maybe they’ll finish fourth in the AFC North and more than anything they will get passed by quite a few teams in the NFL as part of the process. That’s some awesome analysis right there, Peter. Thank you for that. The only thing worth a damn that you said definitively is that the Steelers should have a championship defense in 2021 even without having Dupree being part of it. I don’t think many reading this post will argue much with that.